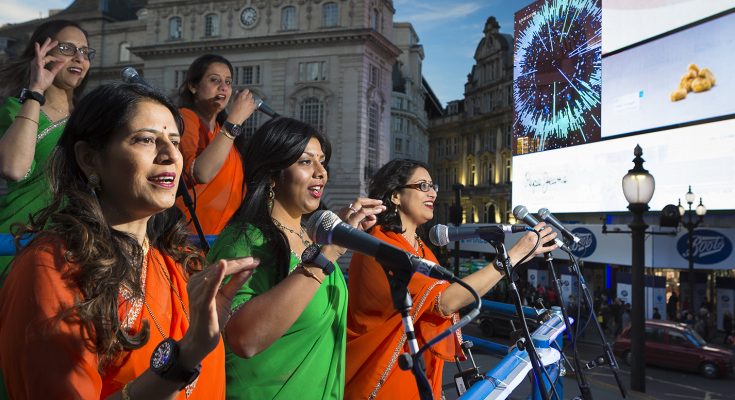 The choirs will perform at London’s famous Eros statue in Piccadilly Circus to celebrate the Gear S3 smartwatch.

London-based choirs made up of people from 24 countries, from Ireland to Bangladesh, will take to the stage each day between 1st and 24th December, forming the Gear S3 World Choir, bringing to life festive songs from around the globe.

The choirs will include: Les Fauristes Chamber Choir, the only French choir in London; the LOL Choir from Latin America; the Reggae Choir from Jamaica; and The Chopsticks Choral Society from China.

The ‘Gear S3 World Choir’ event was devised by agency Cheil London to capture the cultural heartbeat of the UK capital this Christmas. It takes place on a high-tech biometric stage that measures the heartbeat, movements and even calories burnt of each choir in real time as they perform, via the new Gear S3 smartwatch.

A select number of choristers from each performance will wear a Samsung Gear S3 smartwatch that will collect live biometric data, which will be turned into stunning real time visuals on the eight giant screens built into the stage, showing the power music has on people’s health and wellbeing. The choir’s heart rate, calories burnt and movements will be presented as a live data visualisation, created with Oscar-winning VFX studio Framestore.

Framestore Labs designed and developed the real-time reactive system powering the stage’s screens, and the stunning graphical outputs of the choirs’ biometric and audio data.  The Framestore Labs team, led by Global Head of Creative Robin Carlisle, built a string of applications to manage the chain of events involved in Samsung’s World Choir activation, incorporating live data drawn from the Gear S3 watches worn by the choristers as well as audio gathered from the stage’s microphones. The custom network generates bespoke real-time data visualisations for the duration of the choirs’ performances.

Caitlin Ryan, Executive Creative Director of Cheil London, said: “I am so excited about this project because it marks the start of a journey for Cheil London. A journey where we explore what happens when creativity and technology collide to create transformational branded experiences.   It is also a reminder that technology is not something cold and frightening and data is actually just the footprints that humans leave behind.  And this can be very beautiful.”

There will also be experiential activity taking place on site to provide visitors with Samsung product demonstrations.