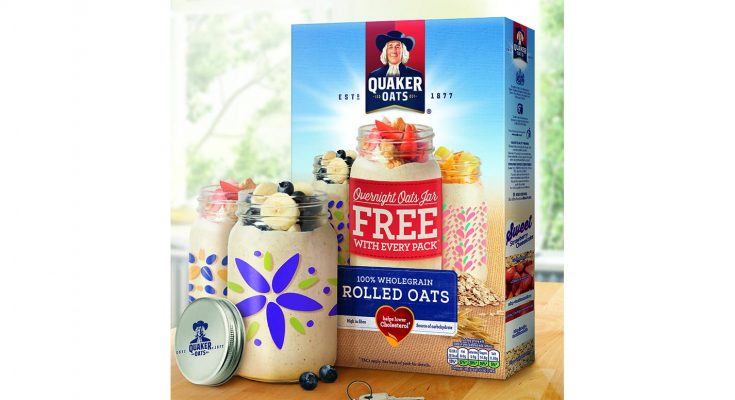 Quaker Oats is rerunning its successful Overnight Oats on-pack promotion from last summer, but with a twist – consumers will now be able to choose the colour and design of the jar they get.

Last year’s promotion saw 40,000 Mason Jars despatched to consumers, but they had to choose from one of five different designs. In the latest version of the promotion, there are three designs, each in three colourways.

The promotion, running on 1kg packs of Quaker Oats, supports Quaker’s ongoing campaign tapping into the interest in ‘overnight oats’ (oats prepared by being soaked in milk or other liquids in the fridge overnight rather than being cooked). Because they are eaten chilled rather than hot, they are proving more popular during the summer months, traditionally a low period for cooked oats.

The promotion runs until the beginning of June. To claim their jars, consumers have to find the unique codes from promotional packs of 1kg Traditional and Jumbo Rolled Quaker Oats, enter them online at www.quaker.co.uk/overnight and pay postage and packing (which starts at £1.99 for one jar and goes up to £9.99 for nine jars). Each code entitles consumers to one jar, and there is a limit of nine jars per household.

Eric Williams, Quaker Oats Marketing Manager, says: “Last year, we gave away 40,000 mason jars as part of the on-pack promotion – a huge success! This year we are mixing things up by offering consumers the chance to interact with the designs. We know that overnight oats are an increasingly exciting breakfast trend continuing to gain momentum, so we expect some great engagement with the campaign. As 62% of cereal occasions include fruit, especially in overnight oat recipes, and a real skew towards fruit options in the summer months, there is a huge opportunity for retailers to drive sales outside of the usual porridge season.”

In addition to the on-pack promotion, Quaker will be showcasing new overnight oat recipes online to inspire shoppers. The brand will also encourage further interaction across social media channels and via a partnership with popular recipe video creators, TWISTED.

The Quaker Oats brand is owned by PepsiCo. PepsiCo generated more than $63 billion in net revenue in 2016, driven by a food and beverage portfolio that includes Frito-Lay and Walkers savoury snacks, Gatorade, Pepsi-Cola, Quaker and Tropicana drinks and Quaker. PepsiCo’s product portfolio includes 22 brands that generate more than $1 billion each in estimated annual retail sales.