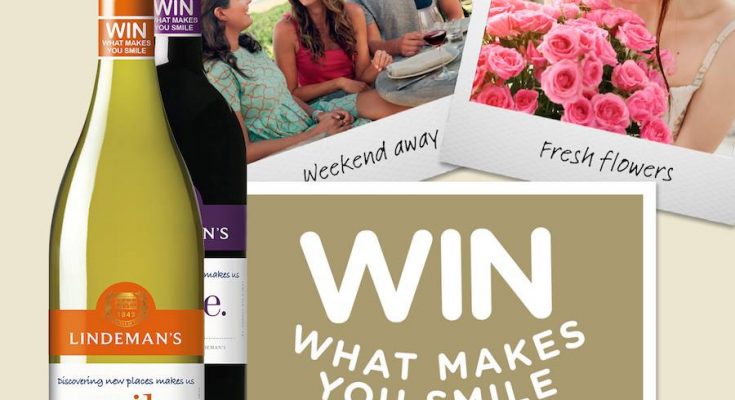 Lindemans ‘win what makes you smile’

Treasury Wine Estates (TWE) is launching a new on-pack promotion in the UK, Netherlands and Denmark as part of its new global multi-million dollar “The World Smiles with Lindeman’s” marketing campaign.

The campaign challenges consumers to write what makes them smile in 10 words or less on the brand’s Facebook page. A total of 15 winners will have their statement ’brought to life’ up to the value of £1,000, with 300 runner-up prizes worth £50 and five final draw prizes of £100.

The top tier prizes will be based on what the winners said makes them smile in their original entry and Lindeman’s representatives and staff from prize fulfilment partner Cloud Nine will liaise with each winner to develop a prize up to a value of £1,000.

The 12-month competition will be promoted with limited-edition ‘smile’ packs on the Lindeman’s Bin range, which includes Bin 65 Chardonnay and Bin 50 Shiraz.

The campaign will be promoted on Facebook and with geo-targeted mobile advertising, which will give notify shoppers when they are near Lindeman’s stockists.

Caroline Thompson-Hill, head of marketing, UK & Western Europe for Treasury Wine Estates, which owns the brand, said: “The campaign is a modern interpretation of Lindeman’s positive philosophy, which was first expressed by founder Dr Henry Lindeman in 1843 and has been a consistent value of the brand ever since.”

‘The World Smiles with Lindemans’ campaign, celebrating the heritage of the brand, was launched last month with the unveiling of new TV and digital advertising.

The £50 and £100 prizes will be delivered as vouchers for (in the UK) Amazon.co.uk, John Lewis, Debenhams, One 4 All or Interflora, at the winners choice. In the Netherlands, winners can select vouchers from Amazon.nl, Best Western, iTunes, Bol.com and Interflora. In Denmark, the vouchers are from iTunes, Zalando, Mango and Interflora.

Winners in the Netherlands will also have local Netherlands Games of Chance Tax paid for them.

A similar promotion kicked off in the Spring in Sweden.