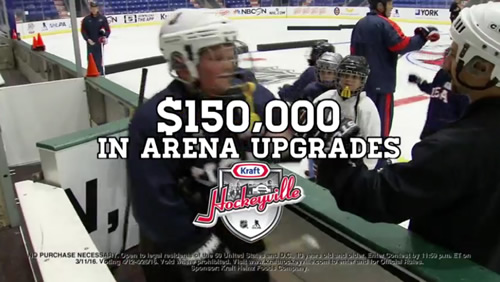 It is the second year running the partners have run the campaign, which will see hockey fans across the U.S. competing for the title of “Kraft Hockeyville USA 2016”. The winning community also gets to host an NHL Pre-Season game televised live on NBCSN plus $150,000 in arena upgrades.

Nina Barton, Senior Vice President of Marketing, Kraft Heinz, says: “The spirit and tradition in Johnstown – last year’s winning community – demonstrated to America what Kraft Hockeyville is really all about. Now, as Kraft Heinz, we’re eager to once again celebrate the pride of local hockey communities and help build the sport by providing much needed awareness and financial support for local rinks.”

Jeremy Roenick, one of the leading American-born scorers in NHL history and an NHL on NBC analyst, is back again as program ambassador.

Like a hockey game, Kraft Hockeyville USA has three periods. In the first period, communities across the country are encouraged to enter by sharing unique stories about their local rink, teams, hockey spirit and passion. Nominations are open until March 11th , 2016 at www.KraftHockeyville.com, where complete contest rules and nomination applications are available.

Ten community finalists will be chosen to kick off the second action-packed period, which includes three rounds of public voting. In the Round 1, the top four communities move on to the next round, with the remaining six receiving $10,000 toward arena upgrades. In Round 2, the top two finalists go through to the final, with the remaining two each receiving $25,000 toward arena upgrades.

In the Final Round, one community will be chosen as “Kraft Hockeyville USA” 2016; the runner-up will receive $75,000 toward arena upgrades.

The winning community will be announced on April 30th, 2016 – and receive the grand prize.

Kraft Hockeyville USA is meant not appeal to passionate hockey fans and bring a renewed sense of pride to communities. Since launching in Canada in 2006, Kraft Hockeyville has had a positive impact on 53 communities with nearly $2 million donated in arena upgrades.

On May 2, 2015, after months of community rallying, Johnstown, Pa. – the city that served as inspiration for the popular hockey movie, “Slap Shot” – was named the first-ever Kraft Hockeyville USA.

Kraft Heinz will also leverage its diverse portfolio of products to help unite hockey fans in their celebrations of the sport and their communities. The campaign will celebrate consumers’ excitement around a variety of iconic brands including Planters, Velveeta, Maxwell House, Heinz Tomato Ketchup, Heinz Yellow Mustard, Oscar Mayer, and Kraft Natural Cheese.