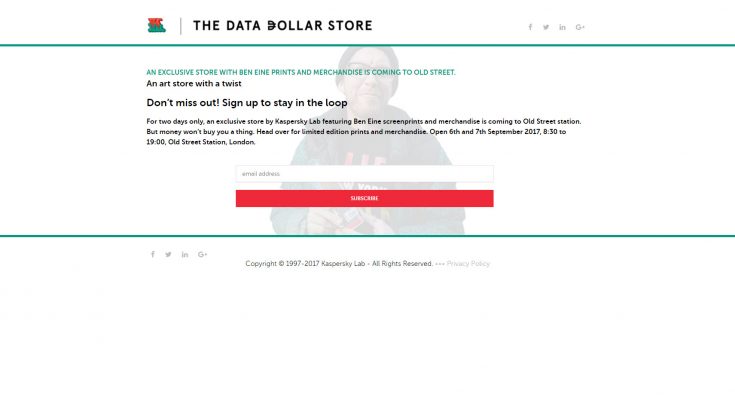 Cybersecurity firm Kaspersky Lab is running an experiential pop-up shop, The Data Dollar Store, at London’s Old Street Station on September 6th and 7th, in an attempt to highlight the fact that people do not understand just how valuable their personal data can be to big brands – and criminals.

For two days only, consumers will be able to buy products, including artwork by London graffiti artist Ben Eine, using a new currency, Data Dollars – basically, photos, messages and emails on their phone. Their personal data will then be displayed on two full-length screens in the shop front, in view of some 70,000 people who pass through the station daily.

People who want to learn more about the store are being asked to sign up at www.datadollarstore.com/. The activation also has a hashtag, #dataiscurrency.

The activation was created for Kaspersky Labs by London-based brand, marketing and communications agency Radley Yeldar (RY), which also created a currency symbol for The Data Dollar.

Research showed that in order to make something meaningful to people, it needs to have tangible value. RY built on this insight to create The Data Dollar – a currency for data.

“The Data Dollar Store will ask shoppers how much data they are willing to part with in order to get tangible things in return,” says Rainer Bock, Head of Corporate PR and Strategic Projects at Kaspersky. “Our hope is that consumers will in turn better value their selfies, their contacts and their emails – and protect them.”

“We took inspiration from recognisable, international currency symbols for the Data Dollar’s design,” said Emily Jeffrey-Barrett, Creative Lead at RY. “The result is a bold, flexible symbol which can be drawn in just one stroke and applied seamlessly to all marketing collateral – working alongside numbers, integrated with copy and as a standalone logo.”

The idea behind Data Dollars is to encourage consumers to change their attitudes and behaviours when it comes to their personal data and be more vigilant against hidden cybercrime.

“People don’t protect their phones very well against hackers, even though they are just as vulnerable as computers. This means they can take anything – from personal photos, to messages, even bank details. Our currency is designed to help people instantly recognise that their personal data has real value and needs to be protected,” said Jeffrey-Barrett. “So, we kept the name simple and set up a shop where people can actually use it. It’s been a brilliant project – particularly working with such an ambitious, creative client.”

Kaspersky Lab is encouraging companies around the world to accept Data Dollars in exchange for goods and services in order to spread the word about the value of data.

Kaspersky Lab is a global cybersecurity company celebrating its 20 year anniversary in 2017. Kaspersky Lab’s deep threat intelligence and security expertise is constantly transforming into security solutions and services to protect businesses, critical infrastructure, governments and consumers around the globe. Over 400 million users are protected by Kaspersky Lab technologies.