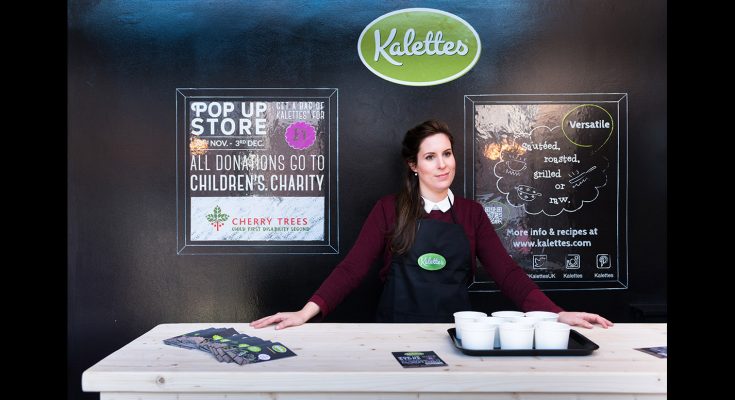 Tozer Seeds has been running a pop-up to promote Kalettes, a natural cross between kale and Brussels sprouts, at Hoxton’s Railway Arch, Geffrye Street, London.

Tozer’s aim was to give away thousands of free food samples, presenting Kalettes in different concoctions including a smoothie, a stir fry and a soup. Consumers were also be able to buy a bag of Kalettes at the special price of £1 with all proceeds being donated to Cherry Trees, a British charity that provides home from home respite care for children and young adults with severe learning and physical disabilities.

David Rogers, UK sales director at Tozer Seeds, says: “We want to bring Londoners the chance to sample the product and interact with our brand, but moreover we want to do it for a good cause.”

Jill Cook, head of fundraising and communications at Cherry Trees, explains: “We’ve been working with Tozer Seeds for a few years already and are very excited about this initiative. It will surely help to make a difference for many families.”

As well as its taste credentials, suppliers are keen to emphasise the health properties of Kalettes, which NHS dietician and writer Maria Dow says contain double the amount of vitamin B6 and twice the level of vitamin C than standard sprouts. They are also rich in vitamin K.

The pop-up is part of a marketing campaign including PR, promotions, events, social media and advertising which is running the UK, Germany, the Netherlands, Switzerland, the Nordics and Spain. The campaign has been created and is being managed by Mint, an international marketing services agency that specializes in food. Mint is part of the Fruitnet International network. Other clients include Pink Lady apples, Manchego cheese, Jabugo ham, the Peruvian government, Portugal Fresh and Fruit Logistica.