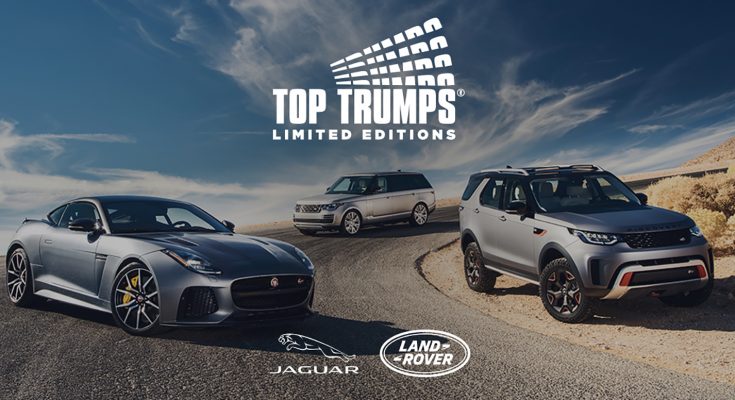 Jaguar Land Rover is driving footfall to its stand at this year’s Goodwood Festival of Speed with a specially-commissioned exclusive digital Top Trumps App for Festival visitors, covering both the Jaguar and Land Rover marques.

The Jaguar Land Rover Top Trumps app is available for iOS and Android from July 9th, and players will be able to compete against each other for a ranking on a live leaderboard as well as the chance to win daily prizes including trip for two to the Ice Drive Academy in Sweden, including flights, tuition and luxury accommodation, year’s membership of a David Lloyd Club for two or £200 to spend in the Jaguar Land Rover boutique.

Visitors to the Festival will receive a Super Top Trumps card (a card that can be added to a Top Trumps pack) when they enter. This card will encourage them to go to the Top Trumps area situated within the JLR stand and download the app via Wi-Fi to receive their exclusive JLR pack of Top Trumps. They can also book test drives and order brochures, while JLR will use the opportunity to capture data on interested visitors.

The app has two games, a single player mode called the Goodwood Challenge and, a Multi-player Shootout.

The Goodwood Challenge will feature a live leader board, with the highest ranked players in line to win the daily prizes. Players will also have the opportunity of boosting their leader board scores by viewing JLR’s cars on the stand and in the paddock.

The Multi-player Shootout enables players to challenge other players randomly or by username.

Jeremy Hicks, Jaguar Land Rover UK Managing Director, says: “This year at Goodwood Festival of Speed we’re celebrating everything that the modern Jaguar brand is about; stunning design, innovation, heritage and incredible performance. From F-PACE SVR roaring up the hill and F-TYPE on the drift track to the XJ50 and all-electric I-PACE on the Jaguar Land Rover stand, we’re looking forward to putting on an astonishing show for all Festival of Speed visitors.”

The 5.0-litre supercharged V8 F-PACE SVR will be tackling the Goodwood hillclimb at its UK debut, as will the most powerful Jaguar ever – the 600PS XE SV Project 8 and the Invictus GT4 Racing F-TYPE SVR. Festival of Speed visitors will also have their first opportunity to see the Jaguar XJ50, a special-edition model designed to celebrate 50 years of the iconic XJ saloon. The XJ50 will appear alongside Jaguar’s revolutionary new I-PACE all-electric SUV on the Jaguar Land Rover stand, as part of the brand’s largest ever presence at Festival of Speed. The company is also celebrating the 70th birthday of the Land Rover.