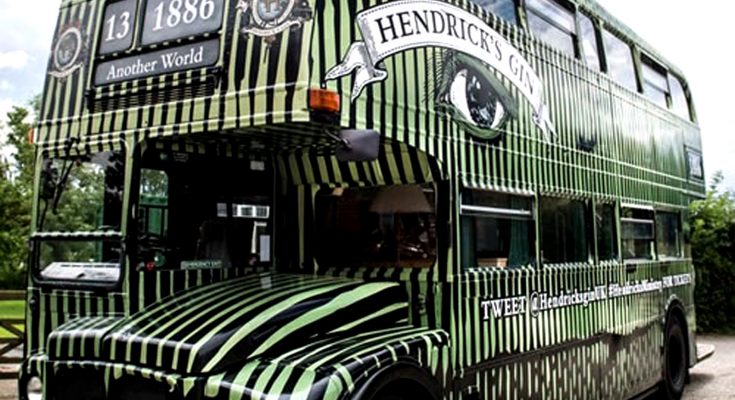 Hendrick’s Gin is offering London commuters the chance to drink a selection of cocktails and enjoy a cucumber macaron as they tour London in a classic Routemaster double-decker bus painted to represent a cucumber.

The activation is part of the brand’s “Ministry of marginally superior transport” campaign, which launched three weeks’ ago with a film on the brand’s YouTube channel.

The bus has been named H.E.R.B.E.R.T. – which stands for “Hendrick’s extraordinary roving bus for exceptionally refined travel” and the “curiously unconventional service” started on July 21st 2016 and runs until July 29th (except Monday 25th) The bus collects passengers from Victoria Street (Westminster), Southbank, Theobalds Road (Holborn) or Euston Road, (Kings Cross). Entry is by pre-booked ticket only, and the fare is £2.50 (although a visit to the website suggests tickets are sold out)

UK commuters are being invited to share their travel problems or triumphs via the Hendrick’s UK Facebook and Twitter, using #HendricksMinistry. The best – and worst – stories receive either a personalised message from the Ministry or a “delightfully different” gift from Hendrick’s gift.

Sam Bovill, Hendrick’s brand manager, said: “The campaign is aimed at bringing moments of delight and peculiar humour to the otherwise everyday, mundane task of commuting.”

Hendrick’s Gin, which has won multiple awards, was launched by William Grant & Sons in 1999. In addition to traditional juniper infusion, Hendrick’s also includes Bulgarian rose and cucumber as flavourings. It comes bottled in an old fashioned dark brown bottle like you would find in Victorian chemists.