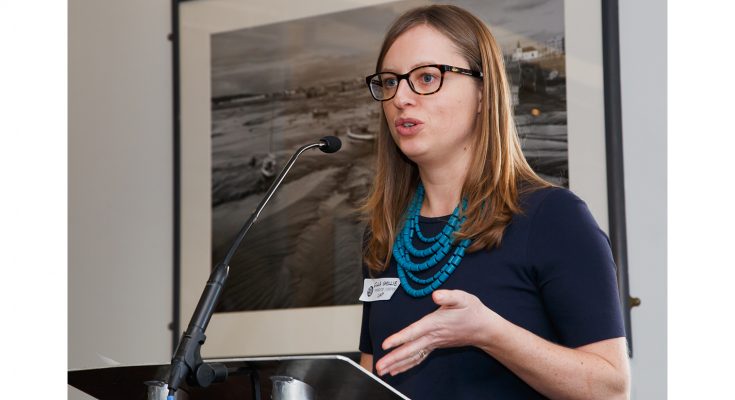 Harmful gender stereotyping in marketing to be banned in 2018

The Committees of Advertising Practice (CAP), the body which writes the rules which govern UK advertising and marketing communications, has announced that a new rule will be introduced into the UK Advertising Codes in 2018 to ban harmful gender stereotyping.

Last year, the Advertising Standards Authority (ASA), the body which administers the UK Advertising Codes, published a report into harmful gender stereotyping in advertising, Depictions, Perceptions and Harm. This provided an evidence-based case for stronger regulation of ads that feature stereotypical gender roles or characteristics which can be harmful to people, including ads which mock people for not conforming to gender stereotypes.

Ella Smillie from CAP (pictured) announced the planned new rule yesterday in Cardiff ahead of a reception at the Wales Millennium Centre with Julie James AM, the Minister responsible for Equalities in the Welsh Government. Smillie said: “Some gender stereotypes in ads can contribute to harm for adults and children by limiting how people see themselves, how others see them, and potentially restricting the life decisions they take. The introduction of a new advertising rule from 2018 will help advertisers to know where to draw the line on the use of acceptable and unacceptable stereotypes.”

Smillie added: “We’ll set out our proposed new standards in Spring 2018 and openly consult on them. That’s why I’m pleased to be in Cardiff at an event with the Welsh Minister responsible for Equalities, Julie James AM, to invite the Welsh public policy community to engage with our consultation and submit their views about whether we’re appropriately reflecting what the evidence is telling us.”

Following the review, CAP committed to develop new standards on ads that feature stereotypical gender roles or characteristics. CAP is now developing a new rule and guidance on the depiction of gender stereotypes in ads, which it will consult on in Spring 2018.

Evidence in the review suggested that harmful stereotypes can restrict the choices, aspirations and opportunities of children, young people and adults. These stereotypes can be reinforced by some advertising, which therefore plays a part in unequal gender outcomes, with costs for individuals, the economy and society. The review welcomed the ASA’s track record of banning ads on grounds of objectification, inappropriate sexualisation and for normalising unhealthily thin body images, but found that more needs to be done on gender stereotypical roles and characteristics portrayed in ads.

The new rule will not ban all forms of gender stereotypes.  For example, the evidence falls short of calling for a ban on ads depicting a woman cleaning or a man doing DIY tasks.  But, subject to context and content considerations, the evidence suggests certain types of depictions are likely to be problematic, for example, an ad which depicts family members creating a mess while a woman has sole responsibility for cleaning it up or an ad that features a man trying and failing to undertake simple parental or household tasks because of stereotypes associated with his gender.

Guy Parker, Chief Executive of the Advertising Standards Authority, observed: “While advertising is only one of many factors that contribute to unequal gender outcomes, we welcome CAP’s decision to introduce a new rule on harmful gender stereotypes in ads.  Although companies have responded positively and constructively to our report, with welcome examples of voluntary action, there is more to do.  We are determined to make sure our regulation calls out harmful and outdated practices and a new rule in the Advertising Codes will help tackle the harmful gender stereotypes identified in our review of the evidence”

Laura Kelly of the Institute of Promotional Marketing’s Regulatory advisory Service said: “The introduction of a new rule on gender stereotypes is a great example of the proactive work the advertising and marketing industry is doing to stay touch with modern values and minimise harm to consumers. This presents an opportunity for agencies and brands to retire old fashioned stereotypes and create innovative promotional campaigns that reflect societal change and really capture the public’s imagination.”