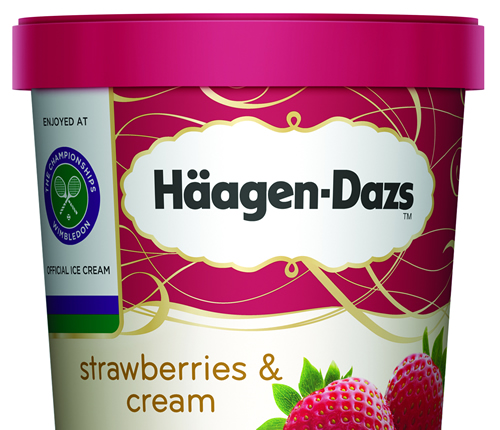 Häagen-Dazs has been named the Official Ice Cream of The Wimbledon Championships after signing a five-year deal with the Lawn Tennis Association, the tournament’s organisers.

The General Mills-owned luxury ice cream brand will be supporting the partnership with a £2.5m UK-wide 360° marketing campaign, including social and digital activity, high-impact print and outdoor advertising, in-store shopper activation plus promotional packs with the official Wimbledon logo on front-of-pack.

The partnership will also see the full range of Häagen-Dazs being sold at Wimbledon as the event’s exclusive ice cream brand, from branded scooping parlours located right by Court No.1 and Centre Court, as well as ice cream kiosks selling stick bars and mini cups.

Nearly 500,000 spectators are expected to attend the championships.

Building on the momentum and premium heritage of the tournament as well as supporting its recent stick bar launch, Häagen-Dazs will be kick-starting its new role by launching a new limited edition Strawberries & Cream stick bar, to be sold exclusively at this year’s event.

Arjoon Bose, Northern Europe Marketing Manager for Häagen-Dazs, says: “Wimbledon is a strong fit for our overall strategy to increase brand saliency and elevate our iconic equity.  Awareness is going to be very high this summer and this gives us the perfect opportunity to excite and attract new shoppers, and ultimately cement Häagen-Dazs’ position as the go-to luxury ice cream brand.