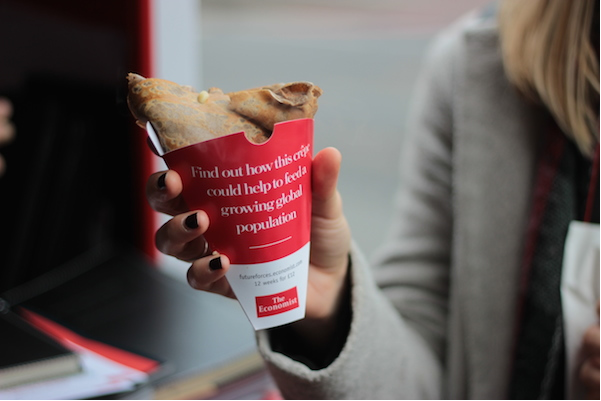 UK business magazine The Economist has been using food and drink to entice new subscribers to sign up over the last couple of years – but rather than offering luxury chocolates, hampers or wine, it has been feeding potential readers ‘cat poo’ coffee and now insects.

The latest off-beat edible incentive has just been launched across London with potential subscribers being offered a selection of free crepes made with crickets, grasshoppers and mealworms over the coming months as part of a campaign entitled Future Forces.

Experiential teams will inspire city centre workers to subscribe to The Economist by introducing them to key innovations that will shape the future – including the idea  that insects can be a healthy and nutritious addition to people’s diets as food shortages loom.

On The Economist’s menu are:

Commenting on the new campaign, Marina Haydn, SVP of circulation and retail marketing for The Economist, says: “Experiential marketing approaches are now a core element of The Economist’s global subscription marketing strategy. Our current live campaigns are all united by a strategy built on the foundation of our brand introducing forces that are shaping our future to potential readers. Insect crepes are a great way for us to deliver a mind-stretching experience as an entry point to The Economist. Our goal is to give a content-rich – and tasty – experience that is unforgettable for Londoners.”

Last year, The Economist ran a campaign offering potential subscribers free cups of Indonesian Kopi Luwak blend, the most expensive coffee in the world, made from beans that have been eaten and then ‘passed’ by a wild civet – also known as cat poo coffee.

The idea was that only people who were open to new ideas and ready to try new things would engage with the experiential teams. Apparently, many passers-by were so interested in trying the brew that they were willing to queue for up to 20 minutes.

That campaign won a Gold in the IPM Awards 2015.

Both campaigns were created for The Economist by marketing agency Sense.