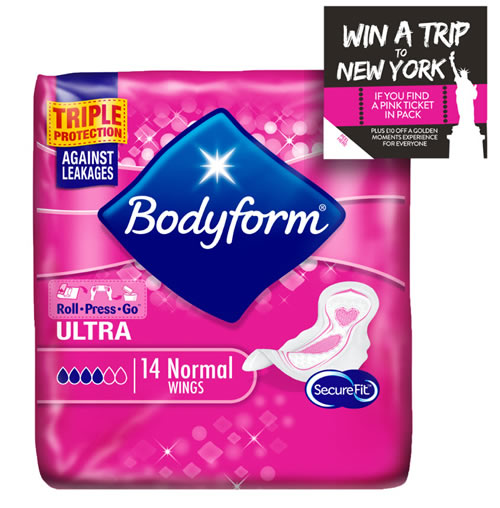 Bodyform, the SCA-owned feminine hygiene brand, is offering consumers the chance to win one of 10 trips to New York for themselves and a friend in its new instant-win Pink Ticket promotion.

In addition, every promotional pack also includes a £10 Golden Moments experience voucher. To claim the voucher, consumers just have to visit www.bodyformpinkticket.com and enter the unique code. Vouchers can be redeemed against more than 2,000 experience choices in the UK. There are 2.5 million £10 vouchers on promotional packs.

Janet McQuilla,  Bodyform Marketing Manager, says: “The Bodyform Live Fearless campaign is all about excitement and daring, and what could be more exciting than finding a Pink Ticket in your pack and instantly winning a trip to New York courtesy of Bodyform? Our products give women the confidence to push their boundaries, no matter what time of the month, and there really is no better way to do this than trying some amazing new experiences courtesy of Bodyform Pink Ticket.”