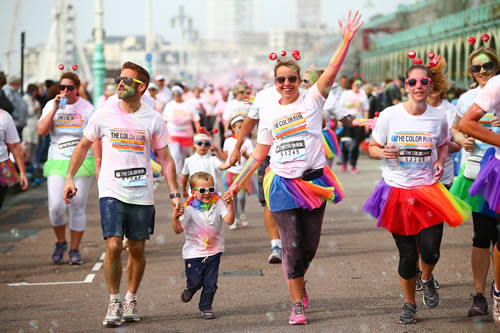 The Color Run Presented By Skittles 2016

The Color Run Presented by Skittles UK event series, which will be taking place in five cities throughout the UK this summer, has announced that Renault, Capri-Sun and Alpen will join its sponsorship roster for 2016, offering the three new partners opportunities to sample their products.

Color Run founder, Travis Snyder, was inspired by the Indian Holi Festival, where participants are covered in coloured dyestuff, and decided to combine the idea with a 5 kilometre running experience. From the first event in the Unites States in January 2012, The Color Run has spread across the globe.

Participants begin the run wearing The Color Run white t-shirt, which is then targeted with dyes at various colour stations located throughout the course. There are no stopwatches involved in the event – which is organised by sports management company IMG – meaning participants can walk, jog, dance and party their way along the colourful course at any pace. With hundreds of events taking place across the globe, the series continues to grow, capturing the imagination of thousands of participants with its happy and colourful philosophy.

As the Official Automotive Partner of The Color Run Presented by Skittles, Renault will be bringing a fleet of Renault Twingo superminis to the events As the Official Drink Partner, Capri-Sun will be handing out samples at each event throughout the summer as part of its ‘Squeeze the Day’ campaign. Finally, Alpen, as Official Cereal Partner, will help runners start their day feeling healthy and active with samples of its new oat based granolas.

The Color Run Presented by Skittles 2016 UK Tour location line-up is as follows:

The colour used at the events is made from food grade cornstarch. It is 100% natural and causes no harm to skin or the environment. The powder used in its events has been tested for flammability and successfully passed the required EU standards.

Headline sponsor Skittles is manufactured by Wrigley, a subsidiary of Mars. IMG is a global leader in sports, events, media and fashion representing and managing some of the world’s best-known sports figures and fashion icons. It also stages thousands of live events and branded entertainment experiences annually.

Capri-Sun is a Coca-Cola brand, while Alpen is owned by Weetabix.