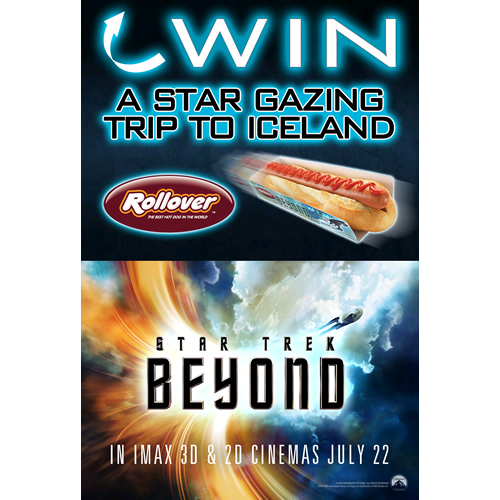 Rollover Hot Dogs has launched a new competition to win a star-gazing short break trip to Iceland for two people, in partnership with the upcoming Star Trek Beyond movie release, which opens in the UK on July 22nd 2016.

The Hot Dog trays feature artwork from the movie, while the Rollover Facebook page offers the chance to win the trip to Iceland. The prize includes return flights for two, three nights accommodation, spending money and trips including a Northern Lights tour, Quad Biking and Lava Caving.

Tony Owen, sales and marketing director for Rollover, says: “The next instalment of the Star Trek franchise starring Chris Pine and Simon Pegg is set to be one of the biggest releases of the year and we’re excited to partner with a film that our consumers will really love. It’s a fantastic promotion to make shoppers aware about the hot food to go and specifically hot dogs, which remain in huge growth within the category due to the continued trend around street food.”

The company has developed a POS pack to communicate the promotion in store which includes posters, wobblers and promotional Hot Dog Trays.