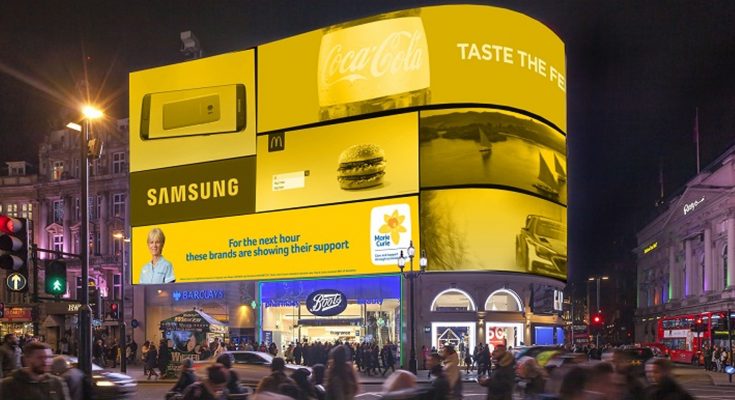 This weekend saw the clocks go back in the UK as British Summertime ended: and cancer charity Marie Curie took the opportunity to take over London’s iconic Piccadilly Circus outdoor advertising sites and turn them yellow in support of Marie Curie Nurses who worked an extra hour while the rest of the country enjoyed more time in bed.

Working with Saatchi & Saatchi London, for one hour only between 7.00pm and 8.00pm on Saturday October 29th 2016, brands including Coca-Cola, McDonald’s, Samsung, Hyundai Motor and the Egyptian Tourism Authority all showed their support for the charity’s ‘Extra Hour’ campaign by agreeing to donate an hour of their advertising time and turn their artwork yellow.

The iconic Piccadilly Lights advertising site, owned by Land Securities, also featured messaging for the full hour explaining why the site had turned yellow and included a call to action to donate to show support for the charity.

Dr Jane Collins, Chief Executive for Marie Curie, said: “We’d like to say a massive thank you to all the brands and media owners who have donated their advertising space in recognition of the work that our amazing nurses do. Practically everyone will be affected by terminal illness at some point in their lives, so it’s really important that more people are aware of the work that our nurses do and that they are able to receive our help if and when they need it.”

Andy Jex, Executive Creative Director at Saatchi & Saatchi London, added: “Saturday night, as the clocks go back – everyone’s out making the most of an extra hour on the town. Meanwhile Marie Curie Nurses are working an hour extra to care for the terminally ill. Piccadilly Circus was the ultimate place to showcase this campaign. Thanks so much to all the brands and media owners involved, we really couldn’t have done it without you.”

UM London and out-of-home agency Rapport worked with media owners around the UK to secure these additional spaces.

Other elements of the campaign include a 60” online film featuring Marie Curie Nurses and a 30” film which features a message of support from actress Alison Steadman whose mother was cared for by Marie Curie Nurses.

The ‘Extra Hour’ campaign aims to raise awareness of the fact that Marie Curie Nurses work overnight, providing care and support in people’s homes. Those wishing to make a donation to help fund more care and support from Marie Curie’s Nurses can text EXTRA HOUR to 70755 to donate £5. Marie Curie receives 98% of the donation.

Marie Curie is the UK’s leading charity for people with any terminal illness. The charity helps people living with a terminal illness and their families make the most of the time they have together by delivering expert hands-on care, emotional support, research and guidance. Marie Curie employs more than 2,700 nurses, doctors and other healthcare professionals, and with its nine hospices around the UK, is the largest provider of hospice beds outside the NHS.