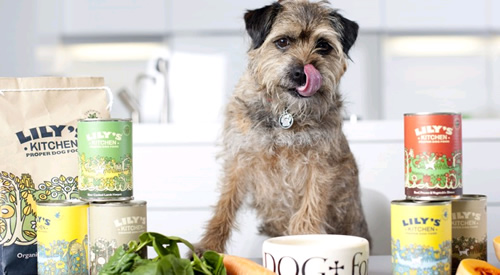 British pet food company Lily’s Kitchen is donating 100 tonnes of its dog and cat food over the next three months as part of a new nationwide charity initiative, called ‘Dinner’s On Us’.

Lily’s is asking consumers to nominate deserving cat and dog charities and will be giving out at least 650,000 meals. The initiative is part of a wider company programme called ‘Acts Of Goodness’, intended to highlight how successful businesses can be a ‘force for good’.

Henrietta Morrison, CEO and founder of Lily’s Kitchen, says: “As dedicated pet lovers at Lily’s Kitchen, nothing saddens us more than a pet in need and nothing brings more joy to us than helping less fortunate pets when we are able to. There are thousands of wonderful organizations, events, and people in the UK quietly doing great work to support pets in need and we want to recognize and applaud their efforts, so please help us to help them.”

Anyone can recommend a deserving pet charity for ‘Dinner’s On Us’ by visiting www.lilyskitchen.co.uk/acts-of-goodness/dinners-on-us. Visitors can check in to see the number of meals that have been donated so far and view images of the various charities and dogs and cats that they have helped by taking the time to nominate.

The campaign is also on Twitter with the hashtag #ActsOfGoodness

The promotion runs throughout February, March and April 2016. Charities receiving donations may be based in the UK or in Europe and some

A meal applies to a complete (not complementary) food, calculated based on either a 3yr old 16.5kg dog or a 1.5yr old 4kg cat.