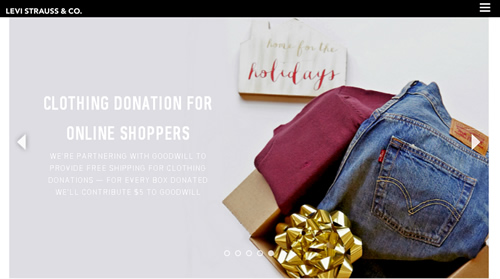 Levi’s is rolling out its clothes recycling initiative in the UK, with a 10% discount on Levi’s products for consumers who donate old clothes and shoes.

Collection boxes are being installed in Levi’s stores and customers who bring in any brand of clean, dry clothing or shoes for recycling will be given a voucher which they can trade in for a discount.

The company apparently plans to expand the initiative across the rest of Europe by the end of 2017.

As reported in www.promomarketing.info in the run up to Christmas last year, Levi Strauss & Co in the US linked with charity Goodwill to help shoppers give unwanted clothing and footwear to the charity and also raise funds for it.

The clothing giant put a special shipping label on its US ecommerce sites for its Levi’s and Dockers brands (see picture) which consumers could download for free. They could then fill boxes – such as the ones they got when they ordered goods from Levi’s and Dockers – with old clothes and shoes they wanted to donate to charity, stick the labels on and put them in the post. The packages were then sent to the local Goodwill depot.

Levi’s also donated $5 for every box shipped using one of the labels, up to a maximum of $50,000.  On ‘Giving Tuesday’ – December 1st, 2015 – Levi’s doubled its contribution to $10 for every free shipping label used, in support of the Global Day of Giving.

The Levi’s activity was supported by a service called Give Back Box, which allows consumers to reuse shipping boxes and even old cardboard to donate unwanted clothing and other items to charity. The idea is to make it easier for consumers to give things they no longer need to charity, saving them the hassle of having to go to a charity shop or collection point.

Levi’s also has a partnership with a US textile recycling company called I:CO where customers can get discount vouchers worth up to 20% off when they drop unwanted items off in-store.