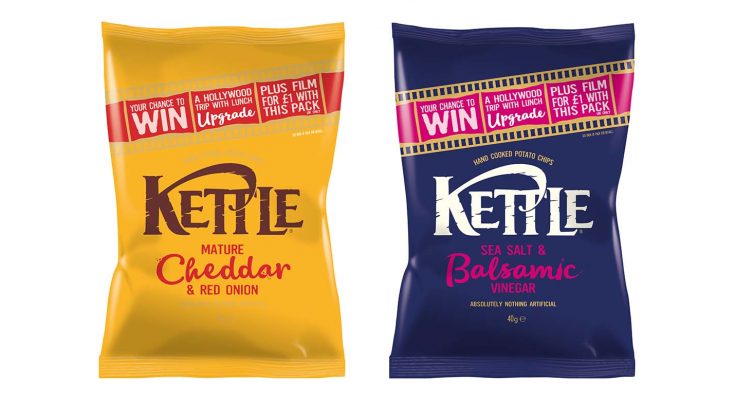 Kettle Chips has launched an ‘Upgrade your lunch’ on pack promotion on its full single serve and multi-pack ranges offering consumers the chance to win the lunch upgrade of a lifetime with a trip to Hollywood – plus every purchaser can also rent a digital film in full HD from Chili Cinema for just £1.

Consumers just need to go online and enter the promotional code printed on each pack to receive their Chili film code and enter the Hollywood Trip prize draw.

The prize will enable one lucky winner and their guest to experience the life of a Hollywood ‘A’ lister, including a poolside lunch at a top Beverley Hills hotel. During their stay in Los Angeles, the winners will also receive a behind the scenes VIP tour at Universal Studios and a helicopter ride over Tinseltown. The prize package includes return flights from the UK or Ireland and five nights’ accommodation in a 5 Star hotel.

The promotion started at the beginning of March, with the prize draw for the holiday prize close at midnight on July 31st 2018. The Chili Cinema film rental for £1 offer closes at midnight on December 31st 2018.

To enter, consumers have to visit the promotional website, www.kettleupgrade.co.uk and enter the promotional code printed on the 40g pack or on the outer bag from multipacks, along with their personal details. They will then be automatically entered into the prize draw for the Hollywood trip and will receive a discount code to enable them to participate in the film rental for £1 offer.

The Chili film code allows consumers to select from thousands of movies and TV series, including new releases only a few weeks after their cinema release, available to stream on a Smart TV, PC, tablet or smartphone without subscription charges.

The promotion is open to all residents of the UK, Isle of Man, Channel Islands and Republic of Ireland aged 18 and over, with the usual exclusions. Only one entry per person is allowed during the promotion. There are No Purchase Necessary entry routes available for consumers living in Northern Ireland and the Republic of Ireland – they can access a separate webpage via a link on the main promotional website, and they will be automatically entered into the Prize Draw.

The on pack will be supported by trade advertising and a full range of POS from dump bins and shelf edge strips for retailers, to bus stops and pallet wraps for Cash & Carry depots and branded beer mats for the on-trade. To amplify the promotion even further a programme of consumer facing activity is planned for the spring, including social media and PR.

In store from the middle of March to the end of June, the promotion will run on a total of 17 million bags across the entire Kettle Chips 40g range, including Price Marked packs, and the four Kettle Chips Multi-packs.