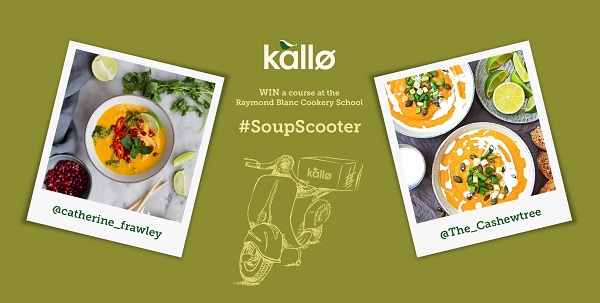 Kallø, the organic food brand, has launched another burst of its successful ‘Kallø Soup Scooter’ influencer-led social campaign, created by Exposure Digital. The activity aims to drive trial and awareness of the brand in the UK, encouraging consumers to cook with Kallø during its key winter and spring months.

The activity, which targets food lovers, will run for three weeks and brings to life the brand’s existing message of ‘savour simple’ and its belief that great food and taste comes from using a few good ingredients rather than lots of complicated ones.

The campaign is fronted by food bloggers Rebel Recipes, Twigg Studios, Plant Based Pixie, Ffion Mckeown and Catherine Frawle, who have each created their own soup recipes using Kallø stock cubes, sharing the recipes across their social channels. Followers are encouraged to create and share their own recipes for the chance to win 50 portions of their soup delivered to their office, street, community, or any location that will make the winner feel like a celebrity chef. Deliveries will be made by the Kallø Soup Scooter.

The winner will also receive a half day cooking class at the Raymond Blanc Cookery School at Belmond Le Manoir, as well as seeing their recipe featured in the January issue of Olive Magazine,  complete with Kallø’s seal of approval.

To enter, consumers are asked to post a picture of their recipes on Instagram accompanied by the hashtag #kallo or #SoupScooter before November 3rd 2016. Winners will be picked by the influencers the next day.

As well as the competition, Kallø will also be sending out recipe boxes containing fresh vegetables and Kallø stock cubes to a further selection of food influencers to encourage additional engagement with the brand during the campaign.

Caroline Mitchell, senior brand manager at Kallø, says: “With the colder months fast approaching, once again we wanted to create a buzz around our healthy stock cubes. After its huge success earlier in the year, we wanted to revitalise our Soup Scooter, using Exposure Digital’s expertise in influencer marketing to champion our individuality; both creatively and through our products.”

Jonathan Fraser, chief strategy officer at Exposure Digital, adds: “Any campaign that harnesses the power of influencers needs to ensure it is positioned not only in front of the right audience, but also uses the correct content. By allowing our influencers to have complete control and create recipes they enjoy, we have delivered an authentic campaign for Kallø and their target audience.”

This is the second iteration of the ‘Kallø Soup Scooter’ campaign; it ran earlier this year, resulting in over two million impressions and nearly 40,000 Likes.