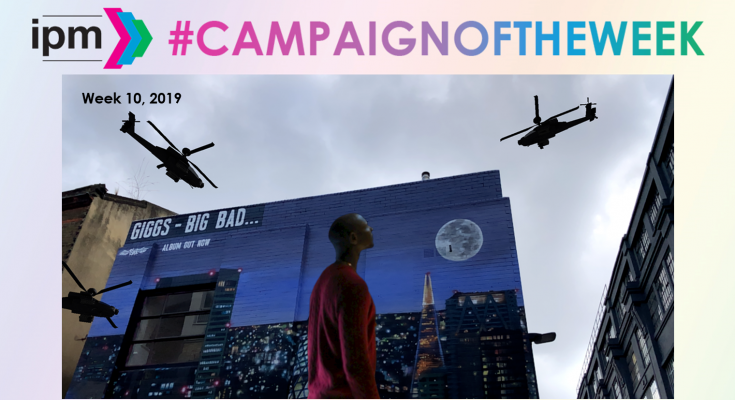 A new augmented reality wall mural has been unveiled in Shoreditch, London to promote the launch of BIG BAD…, the new album from British rap artist, Giggs. By downloading an app via a QR code at the wall, fans can point their device at the wall and watch the hand-painted mural come to life with a scene based on the album launch video.

They were appointed by Island Records, a British record label owned by Universal Music Group and whose artists include, among others, Giggs, Dizzee Rascal, Ariana Grande and Mumford & Sons, to provide a unique experience promoting the BIG BAD… album release and to engage fans in an exciting and genuine way.

Akosua Scantlebury, Urban Division Manager at Island Records, commented: “BIG BAD… is an album of enormous ambition and arguably Giggs’s finest achievement. The album was introduced to fans through a high energy cinematic trailer, which set the tone for the whole campaign. At Island we really wanted to match that ambition with an interactive visual that stops people in their tracks. Through collaboration with Gate Reality and ALLOVER, I think it is safe to say we achieved that.”

The experience works by using augmented reality image tracking where the app is programmed to recognise the wall as the specific target. This target is then used as a trigger to launch the experience and to map the augmented objects to the specific real-life environment.

Gate Reality used green screen footage of Giggs from his album release video to create his giant form dominating the London skyline, along with 3D models of helicopters and tanks. Both the mural and footage were carefully designed and manipulated to make it appear as though Giggs is moving within the scene.

Ed Morris, Co-Founder & Director at Gate Reality, said: “Giggs has become recognised as one of the most vital and exciting artists around – his two previous albums reached #2 on the UK album charts and he’s collaborated with the likes of Drake, Ed Sheeran and Mark Ronson – and so we were delighted to be a part of this project. BIG BAD… is a very visual album and so this augmented reality mural is the perfect way for Giggs to engage his fanbase.

“By combining street art with mobile AR technology, we can give our clients and brands a platform to tell more engaging and shareable stories across physical and digital mediums, elevating the potential reach of localised out-of-home advertising. We look forward to using this site to bring more brands to life through this compelling medium.”