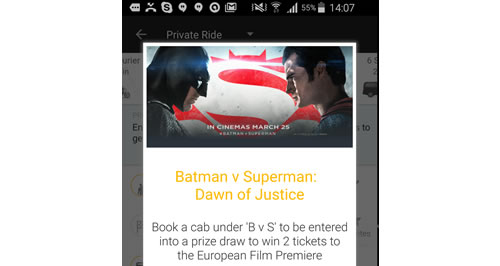 Black taxi booking app Gett has linked with Warner Bros. Pictures UK for a promotion offering people the chance to win tickets to the London premiere of Batman V Superman: Dawn Of Justice.

For one week only, from 10.00am Friday March 11th to 11.59pm Thursday March 17th, anyone using the Gett app to book a black cab in London will see the red BATMAN v SUPERMAN glyph icon at the top of the home screen, entitled ‘B v S’. When booking a taxi ride using the icon, users will get a fixed fare black cab, only available through Gett, as well as automatic entry into the competition.

One lucky winner will be awarded a pair of tickets to the film’s star-studded red carpet premiere in London’s world-renowned Leicester Square on March 22nd, which will be attended by cast and filmmakers including Ben Affleck, Henry Cavill, Amy Adams, Jesse Eisenberg, Holly Hunter, Gal Gadot and director Zack Snyder.

In addition, 100 branded goody bags containing film merchandise will be placed in select Gett cabs around the capital, allowing anyone who books a Gett ride to receive the chance to win instant rewards throughout the week.

This competition is exclusive to Gett and Warner Bros. Pictures UK and marks the first entertainment promotion of its kind in the UK for the transport and lifestyle app.

The Gett app is free to download on iOS and Android. Competition Terms and Conditions can be found by visiting Gett.com/uk.

Founded in 2010, Gett is an on-demand app that lets people instantly book a licensed black cab with their mobile phone, and is available for both consumers and corporations. Gett is a $207m funded company and the largest international on-demand player by revenues. It is available in 50 cities, including New York, London, Edinburgh, Manchester, Moscow, St Petersburg and Tel-Aviv. 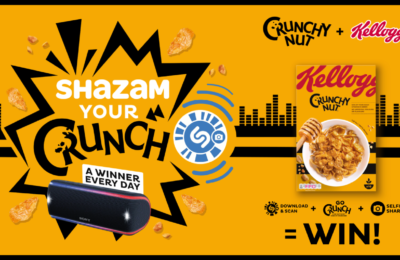