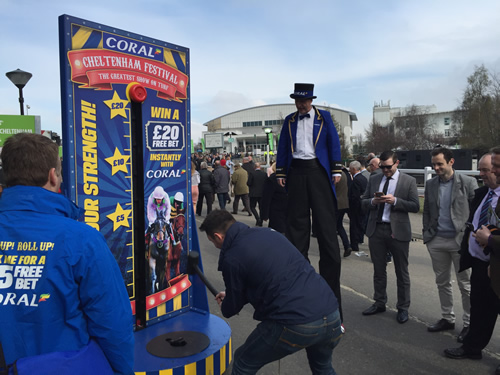 Coral is bringing circus thrills to this year’s Cheltenham festival with a campaign designed to get punters to choose it as their bookmaker of choice at the racecourse.

‘The ‘Greatest Show on Turf’ will target festival goers with fun circus style activation that aims to get them to download the Coral app, win free bets and place their first bet of the day with the bookmaker. The campaign was created for Coral by creative agency, Space.

Coral will support the experiential push with a disruptive street projection campaign playing specially-created circus-themed ads across a number of iconic venues in the centre of Cheltenham. The ads will prime race goers for the experiential campaign that they will encounter over the four days of the Festival.

Race goers will also be targeted at high traffic spots on the way to the racecourse. A stilt-walking ring master will encourage visitors to sign up for the app and try and win one of thousands of free bets worth £5, £10 or £20 by hitting a ‘test your strength’ high striker bell.

The circus teams will drive app downloads via leafleting and face-to-face contact with festival goers. Each group will carry a MiFi unit to let people download the Coral app, allowing them to access Coral’s bets on the course.

Jason Nicholas, managing partner at Space, says: “Cheltenham is a highlight of the racing calendar with a circus-style atmosphere of its own. We wanted to reflect that with activity that was fun and in the spirit of Cheltenham, as well as helping Coral to really make its mark and stand out amongst the competition noise.”