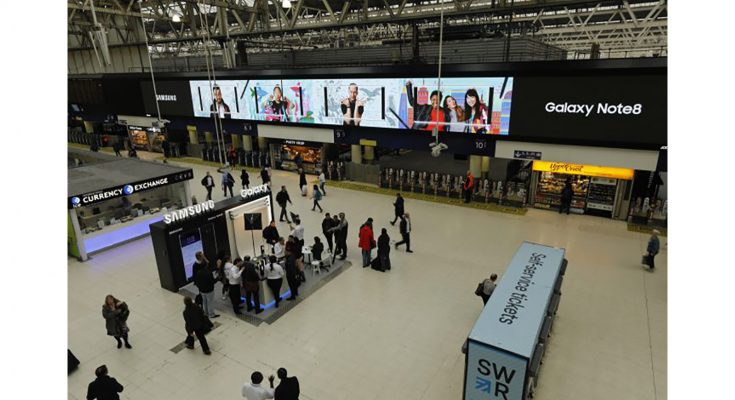 Samsung has been supporting the launch of the Galaxy Note8 with experiential and Out-of-Home take-overs of key locations in some of the world’s busiest cities, including London’s Waterloo Station.

At the end of September, Waterloo Station was decked out in eye-catching images of the device encouraging commuters to “Do bigger things.” Waterloo is the busiest rail station in London with a footfall of 4,196,748 every two weeks, and contains the largest indoor advertising screen in Europe in the form of JCDecaux’s 40 x 3 metre Motion@Waterloo.

Commuters and other visitors to Waterloo were given the chance to have their image displayed on the station’s digital screens or have it emailed to them to share on social. They could also enter a competition to win the new tablet device.

Cities including Berlin, Rome, Paris, Singapore, Milan and New York have been the backdrops for a global campaign which communicates the creative possibilities powered by Samsung’s latest flagship smartphone through immersive Galaxy Note8 signage.

The campaign follows a similar one held in New York City’s Times Square on September 15th. The iconic entertainment centre and tourist destination , which sees an estimated 380,000 visitors every day, was illuminated with S Pen-embellished portraits, animated illustrations and whimsical images of the Galaxy Note8 across 43 screens.