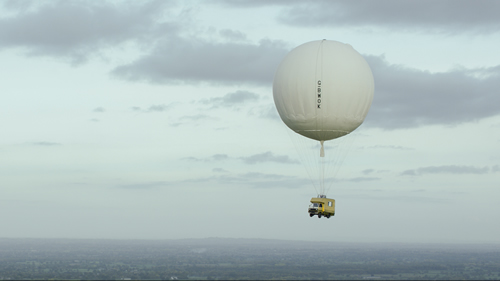 Foster’s has marked the launch of its Foster’s Helluva Tour TV series with a PR stunt featuring a Bedford Rascal camper van being lifted 2,000 feet over the Shropshire countryside.

The Heineken-owned brand ran a UK roadshow this summer offering members of the public the chance to be cast in the show, with a mysterious touring telephone box popping up in key cities up and down the country as part of a campaign to find four intrepid travellers.

The series documents the epic 17,000 mile journey undertaken by the four (all total strangers) in a tiny van, driving from the UK to Melbourne, Australia, the birthplace of the beer, where they will celebrate with a pint.

The Foster’s Helluva Tour TV series has been created by adam&eveDDB and Channel 4, in collaboration with Alleycats and  adventure travel specialists The Adventurists, the company behind challenges including The Mongol Rally and the World Cycle Race.

The series is being shown on digital platform All 4 this month as part of the Foster’s Original Comedy on 4 sponsorship, with extra footage and behind the scenes content available on Foster’s social channels (Facebook, Twitter, Instagram).

It will include 10 five-minute long episodes filmed through a mix of fixed-rig cameras in the van and video diaries from the four, who will be taking part in unusual cultural customs and challenges along the way.

Ifeoma Dozie, Brand Director at Heineken UK, says: “We’re really excited about the Foster’s Helluva Tour, a unique adventure not just for those in the campervan but also for those tracking their progress on television and at home. This is an epic, once-in-a-lifetime journey – and our awesome foursome, with their ‘why the hell not’ attitude, will have experiences to remember forever.”