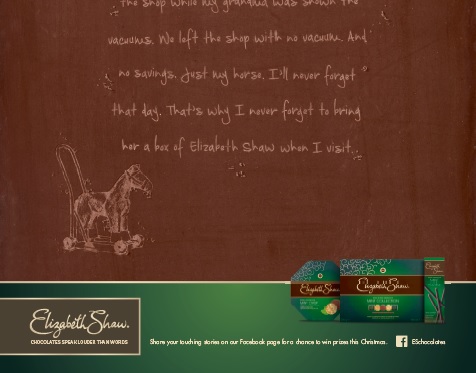 Chocolate brand Elizabeth Shaw is marking the clocks going back this weekend in the UK with a new marketing campaign, ‘Thoughtful Gestures’, which will be asking Britons to use the ‘extra hour’ they get to show appreciation to someone else.

The promotion is the first activity since the brand was bought by Colian Holding SA, Poland’s biggest confectionery company, from its previous owners, a Norwegian investment company, in March 2016.  ‘Thoughtful Gestures’ has already launched on social media and the press campaign will commence tomorrow, October 25th 2016.

The idea behind the campaign is that, in a world where everything is moving so fast, there is often no time to think about anyone else. The brand wants to encourage thoughtfulness and demonstrate how even the smallest gestures of kindness can make the biggest difference to someone’s day.

A Woman’s Own promotion will encourage people to share their thoughtful stories on the Elizabeth Shaw Facebook page, which is supported with a fully integrated social media campaign activated by Spider PR.

In conjunction with the promotion, press print ads will feature across women’s lifestyle and foodie titles.  The creative, along with media planned and booked by Home, features thoughtful stories showcasing small gestures friends or family members have made. The stories feature a grandmother buying her grandson a rocking horse with money set aside for a vacuum cleaner and a best friend providing support through a heart break.  The stories are elegantly inscribed on slabs of chocolate.

Elizabeth Shaw will also partner with Magic Radio as an official partner of Magic Radio’s ‘The Magic of Christmas,’ a star-studded concert held on November 27th 2016 at the London Palladium. In the four-week run-up to the event, as part of Angie Greaves show, which airs 2pm-5pm every weekday afternoon, listeners will be encouraged to nominate someone they want to thank for their thoughtful gestures on ‘Thoughtful Thursdays’. Angie will then gift the deserving winners with a hamper crammed full of Elizabeth Shaw chocolate.

Hayley Coggins, Marketing Manager for Elizabeth Shaw, says, “We are really proud and excited for the launch of our integrated campaign – the first of many more to come! With Christmas fast approaching, we really wanted Elizabeth Shaw to own ‘thoughtfulness’ and to encourage giving the gift of chocolate for kind and considerate gestures, as chocolates speak louder than words.”

In Britain, British Summer Time ends at 2.00am on Sunday October 30th, as the country reverts to Greenwich Mean Time. The result is that people effectively get an extra hour in bed.