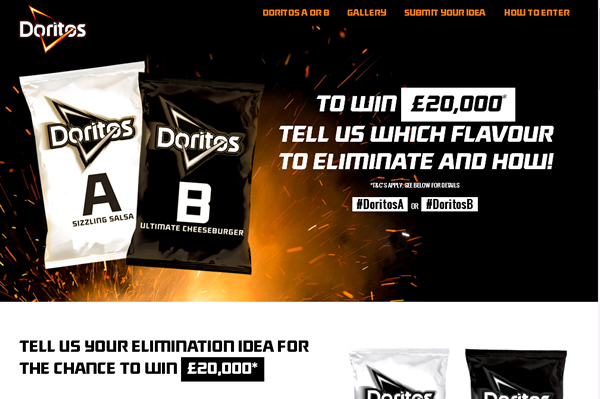 Doritos has launched a new flavour campaign, offering consumers the chance to win £20,000 by voting to eliminate one of two new flavours – Sizzling Salsa or Ultimate Cheeseburger.

The new flavours come in opposing white and black packets for a bold visual effect.

Consumers are being asked to vote for which flavour they want to get rid of, and also to nominate ways to eliminate their choice. Once the votes have been counted to see which flavour is the least popular, a panel of judges will then choose the most creative elimination method. The person responsible for submitting it will win the £20,000.

Entries must not be longer than 140 characters. They can be submitted via Facebook, Twitter or at www.aorb.doritos.com using the hashtag #DoritosA or #DoritosB for the flavour they want to eliminate. The winner will see their suggestion for how to get rid of the losing flavour brought to life in animated format at the end of the campaign.

The site already features animations of a number of possible ways to destroy a flavour.

Andy Hawkswell, marketing manager for Doritos, said: “We are thrilled to be launching a new Doritos flavour campaign, a fun concept which ties in brilliantly with Doritos’ bold brand messaging. Experience tells us that customers will love the interactive aspect of the promotion and retailers will benefit from heightened interest in the brand. We’re really looking forward to seeing the nation’s creative elimination ideas and finding out which flavour will survive.”

The promotion is open to residents of UK, Channel Islands, Isle of Man and the Republic of Ireland who are over 18 years. It kicked off in mid June and runs until September 4th 2016.

Doritos is made in the UK by Walkers Snack Foods, part of PepsiCo.