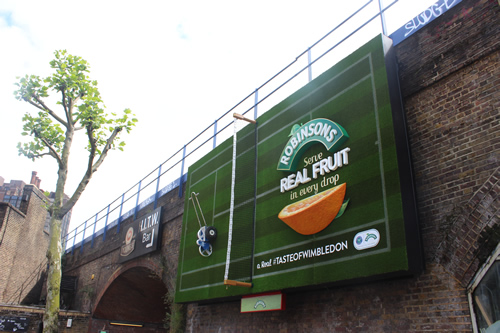 Britvic has collaborated with M/Six and Kinetic, global leader in planning and buying out-of-home (OOH) media, for a Robinson’s campaign to transform the area around Waterloo station into a tennis-themed display to mark the upcoming Wimbledon tournament.

The campaign, reminiscent of Robinson’s 1988 ‘Anything else just isn’t tennis’ advertisement, is running until July 18. The ads will be displayed across Primesight’s Waterloo domination sites and will include a special-build installation devised by Kinetic Active, featuring a replica tennis net and a line machine previously used at Wimbledon. The mini replica was designed by integrated agency iris.

It is understood that there will also be sampling and experiential activity in and around the station.

Wimbledon first partnered with Robinson’s 80 years ago, launching its iconic Lemon Barley Water at the 1935 championships. Since then, Robinson’s has become synonymous with what is one of the most iconic British sporting events, with 2016 marking the launch of new squash’d flavours.

Sarah Norcup, Creative Development Executive at Kinetic, said: “Working with Robinson’s provided us with the opportunity to create a memorable campaign, celebrating one of our nation’s most loved sports. It’s always exciting when we work with a heritage brand like Robinson’s, as the scope to fuse heritage with cutting edge creative advances creates the groundwork for a truly unique OOH experience.”

Nadine Campbell, Business Director at M/Six said: “This year we wanted to really amplify Britvic’s sponsorship for Wimbledon, with a significant, dramatic OOH presence. So we worked closely with Kinetic to create the Waterloo Domination campaign, delivering real impact and awareness, in one of London’s busiest commuter routes. The highlight of this is definitely our largest billboard, outside the station entrance, which is a mini replica of a Wimbledon pitch, designed by iris.”

Toby Fairlamb, Account Director, Primesight, commented: “We see Waterloo as the gateway for supporters to get to and from the famous tennis tournament and the Domination is the perfect platform to engage fans. According to Route, the Domination delivers over 9 million impacts across a two week period and we are sure that the first ever special build on this unavoidable site will generate even greater levels of impact and interest from consumers.”