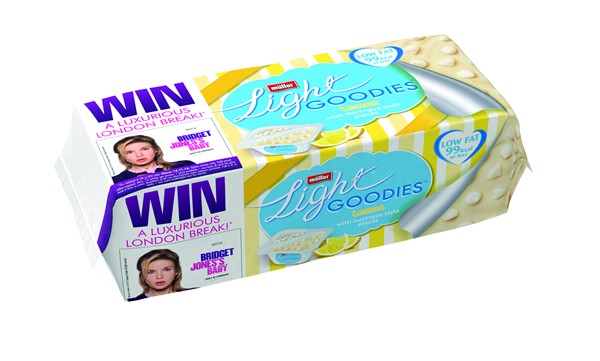 The release of Bridget Jones’s Baby has been marked with a number of high profile partnerships with brands, with at least two — Müller and Aero – running on-pack prize promotions.

Muller, Britain’s leading yogurt and chilled desserts manufacturer, is celebrating its partnership by launching an on-pack promotion offering consumers the chance to win “A Luxurious London Break” in Bridget’s hometown.

The winner and a friend will have the opportunity to sample the best of London, staying in a 5* hotel and choosing from a range of exciting activities tailored to their preferences.

The promotional packs each contain a unique code on the inside of the outer wrapper with instructions on how to enter at mullerlight.com

The promotion is live in stores now and is being supported on TV and with shopper marketing plans.

The Aero ‘Win Bridget’s Tablet promotion offers the chance to win an iPad Air 2 Tablet every day until October 23rd 2016, with another three to be won in late draws if people buy packs after the main draw closes. There are 59 iPads to be won in total, plus covers.

To enter the draw, consumers have to buy promotional packs, find the unique codes inside wrappers and enter them at www.aerochocolate.co.uk.

Aero is made by Nestlé UK Ltd.

Bridget Jones’s Baby is being distributed by Universal Studios.