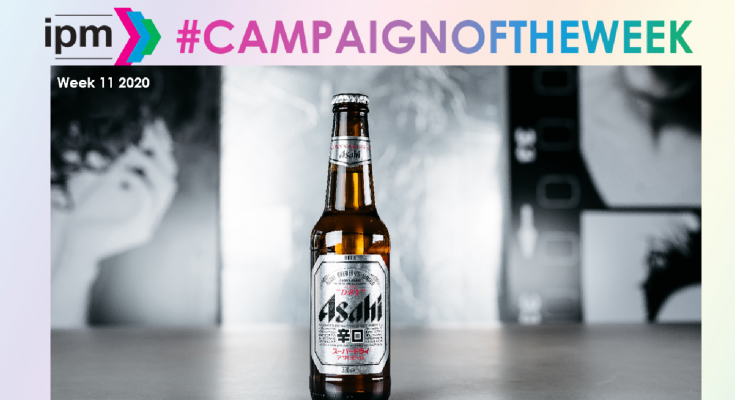 Asahi Super Dry, the No1 Japanese Beer in the UK1, is set to launch its first fully-integrated through-the-line ‘Karakuchi Nights’ campaign, the launch of a high reaching broadcast digital media plan ‘Discovery is Calling’, and the introduction of ‘The Masters of Karakuchi’ bartender programme.

‘Karakuchi Nights’ launched in Manchester last week and will roll out across participating cities and outlets until October 2020. Reaching an estimated 3.4m target consumers, the Japanese experience will deliver an in-venue pop-up experience, driving trial in 50 outlets as well as 120 nationwide sampling opportunities.

From May,  a broadcast digital campaign based around the concept of ‘Discovery is Calling’ will showcase Asahi Super Dry as a beer brewed for the curious, from a place that peaks audience curiosity. Targeting London and other major UK cities, the 30” video will appear across a mixture of Video on Demand, OOH, Digital and Social platforms.

Alongside consumer-focused campaigns, Asahi Super Dry will also be launching a new bartender advocacy programme, ‘Masters of Karakuchi’. The bespoke programme will be based on three core pillars of ‘Teach Me’, ‘Inspire Me’ and ‘Reward Me’ to spark discussion in front of and behind the bar between customers and bar staff and ultimately celebrate those that deliver exceptional customer service.

Tim Clay, Managing Director of Asahi UK, said: “We wanted to build on the success of last year’s City HITs, coming back bigger and better in 2020 to make sure that Asahi Super Dry is front of mind for beer lovers. Both Premium and World Beer categories continue to go from strength-to-strength and Asahi Super Dry is perfectly positioned to capitalise on these ongoing trends. The brand is growing at a phenomenal rate so it’s exciting to explore even more ways to drive home the Super Premium credentials of the beer and we’re really looking forward to seeing the response to the various activations.”

Later this year, Asahi Super Dry will also run on-pack promotions – offering consumers the chance to ‘Win A Trip to Tokyo’. More detail to be shared at a later date.