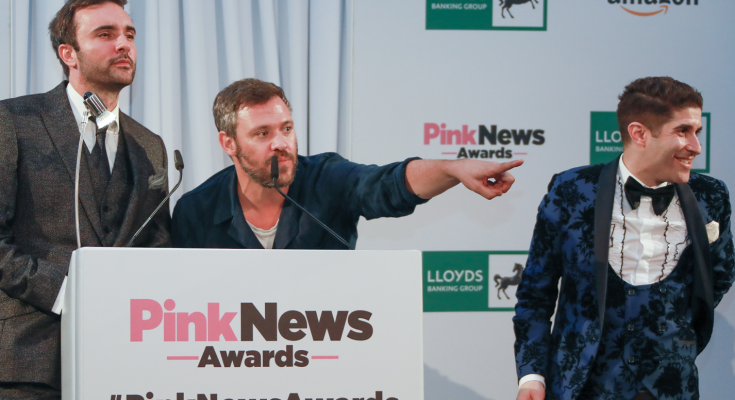 Jul 04, 2019, 10:54 amComments Off on Amazon launches campaign with PinkNews to boost inclusive education in schools

Amazon has launched a campaign in partnership with global publisher PinkNews to boost inclusion in schools by celebrating the importance of teaching LGBT+ diversity through literacy.

The campaign launches today with the roll out of Amazon’s LGBT+ Reading Roadshow, the UK’s first ever UK-wide LGBT+ reading programme.

Designed for secondary schools, the roadshow combines inclusivity workshops with the provision of free books and PinkNews merchandise for schools around the UK.

This element of the programme is fronted by the campaigner and musician Will Young and is presented in association with the LGBT+ educational charity, Just Like Us.

It comes during new legal battles concerning the right to inclusive education and the teaching of LGBT+ equality which led to demonstrations outside a Birmingham primary school. Anti LGBT+ protesters have since been banned by a court injunction from protesting outside the school.

The LGBT+ Reading Roadshow will visit secondary schools neighbouring Amazon’s UK sites around the country, using story-telling, advice and mentoring together with guest speakers and readings from inspirational books about the importance of acceptance.

Participating schools will receive a free Book Box for their libraries containing a selection of books about the importance of LGBT+ inclusion and the experiences of LGBT+ people.

Each box will include PinkNews branded and designed pin badges, part of a new merchandise range that PinkNews is launching on Snapchat and other ecommerce channels later this month.

The campaign was inspired by a new survey commissioned through YouGov which reveals that more than half (58 per cent) of teachers welcome more support from businesses like Amazon and PinkNews in promoting LGBT+ diversity and inclusion in schools to help students build important life and career skills.

Activity culminates with Amazon’s headline sponsorship of the 2019 Pink News Awards which take place this October.

Simon Johnson, UK country manager for Books, Amazon, and executive sponsor of Glamazon, the Amazon LGBT+ employee affinity group, said: “Diversity and inclusion can make everybody stronger – benefiting communities, schools and across society as a whole. So by meeting positive role models, running workshops which tackle the causes of bullying and opening young minds to literature that challenges stereotypes, we hope the LGBT+ Reading Roadshow, run in partnership with Pink News, has a positive impact on students and builds on the existing work of schools. Amazon’s brand and values will be present via our touring Treasure Truck, branded collateral, “Glamazon” employees as role models, all supported by PinkNews content. Activity culminates with our sponsorship of this year’s Pink News Awards, and the campaign complements Amazon Music’s continued role as official music partner for Pride in London this summer.”

Benjamin Cohen, CEO of PinkNews, said:“It’s encouraging to see Amazon go above and beyond in its commitment to diversity and inclusion – not just representing those within the LGBT+ community, but right across society. Taking that positive message directly into schools is a force for good.”

PinkNews has been unveiling nominations for the 2019 Awards during a series of parliamentary receptions in Edinburgh, Belfast, Cardiff and London throughout June and July.