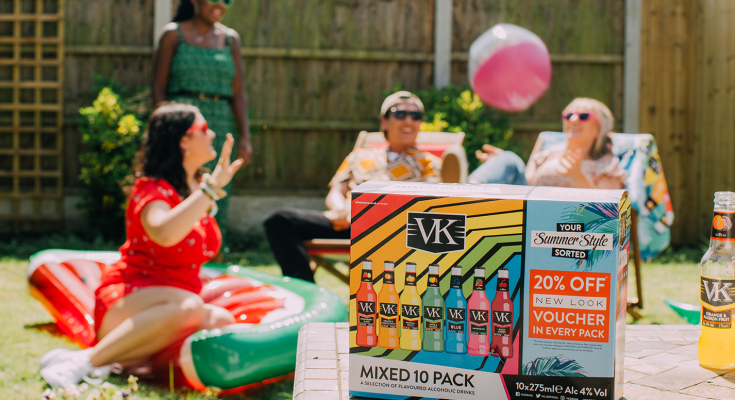 May 29, 2019News, Partnership Marketing, Prize promotion, shopperComments Off on VK campaign sorts summer for shoppers with 20% off at New Look

To celebrate a new listing in Tesco and reward loyal VK fans, VK will be giving consumers 20% off leading fashion retailer, New Look, with every purchase of its mixed ten pack.

The summer campaign, ‘VK Sorts Your Summer’, is supported by a six-figure marketing push, which will see VK work with Love Island stars Alex and Olivia Bowen and a host of other relevant celebrity influencers.

The brand will be undertaking experiential activity over the summer, where fans can win the chance to be styled by the Love Island duo in New Look clothes, get their hands on exclusive VK merchandise and taste limited edition VK flavoured adult ‘pick and mix’ sweets.

Sought after personalised VK merchandise can be won across the summer on the VK official website and social channels. Bigger and better than ever before, plus with a design-your-own element, the merchandise includes VK trainers, backpacks and sunglasses.

In addition, the brand will also be embarking on a huge ATL advertising campaign in Heat magazine, The Metro, Lad Bible, The Daily Mail and The Sun to further bolster the ROS of the pack. When combined with social media activity, the VK Sorts Your Summer campaign is expected to reach the timelines of over 30 million consumers.

Steve Perez, Chairman at Global Brands, said: “We are thrilled that our new Tesco listing enables even more VK fans to get their hands on the VK mixed pack and benefit from the New Look offer. Fans of VK are genuinely passionate about the product and we wanted to partner with a brand that shared our ethos, fan base and demographic and reward them with an offer to complete their summer look. With an exciting summer of activity ahead, VK is there every step of the way to sort consumers’ summers, whether that be their summer fashion, festivals or fun times like BBQs and house parties.”

The 20% off voucher, which is available for redemption in New Look stores or online, is called out on the new campaign specific tropical VK mixed pack box. The VK mixed pack is currently taking the off-trade by storm, outperforming competitors across the board, +21% in value and +23% in volume YoY.

Much to consumers’ excitement, the pack now permanently contains the newest VK flavour, VK Watermelon, voted for in masses by VK enthusiasts last summer during the 2018 ‘What’s Your Flavour?’ campaign, beating the likes of Violet, Wild Fruits and Raspberry & Pineapple to be crowned champion.

The VK mixed pack will be available in the off-trade nationally at Tesco, Asda, B&M, Spar, McColl’s and Nisa stores, plus independent convenience stores. The pack has an RRP of between £8-£10.