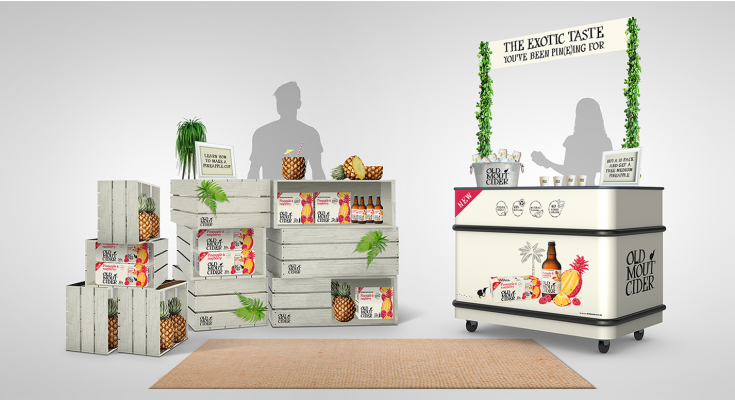 Old Mout has launched their new Pineapple & Raspberry flavour with an instore campaign for Sainsbury’s delivered by TWELVE to drive trial.

With every purchase of a 10x pack of Old Mout Pineapple & Raspberry, customers will receive a free pineapple with instructions for how to upcycle the pineapple & use it as the perfect drinking vessel for your Old Mout!

The new flavour is the latest fruity flavour from Old Mout and is the meeting of exotic pineapple and tart raspberries, blended to remind them of balmy, far flung places.

In addition, in 30 Sainsbury’s nationwide, keep an eye out for the instore sampling stands to try the exotic new taste of Pineapple & Raspberry.

Lindsey Taylor, Business Director at Twelve, said: “We are thrilled to be able to deliver a unique way for customers to enjoy drinking Old Mout & to give inspiration to upcycle fruit to make innovative drinking vessels – at Old Mout Kiwi Camp earlier this year, we saw festival goers go mad for pineapple cups, so we are delighted to bring this opportunity to Sainsbury’s shoppers. And it is the perfect way to fully enjoy the flavours of new Pineapple & Raspberry Old Mout”