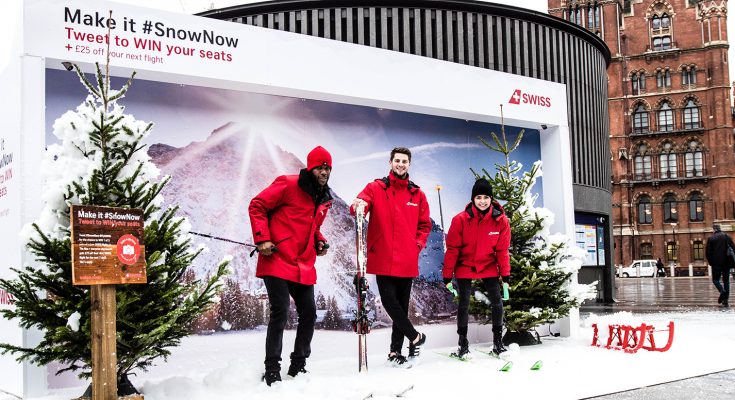 Designed by creative agency Space, the activation saw an interactive billboard delivering on-demand snow when prompted on twitter with #SnowNow. The experiential campaign targets the typically late-booking UK market, aiming the encourage them to get online to book with SWISS, with the billboard underlining the message that “snow is only ever one click away”.

The integrated campaign featured the specially-designed billboard with a promotional overlay activated by the hashtag. Every tweet triggered a cascade of snow, while all participants received £25 off their next SWISS flight and the opportunity to win one of five pairs of return flights to the Alps.

Activity at the station was promoted by a series of Instagram influencers while a PR campaign provides exclusive competitions in London publications.

Chloe Ravat, Senior Marketing Manager at SWISS, said: “The 360o campaign is a fun and engaging way to attract attention to our brand. The reactive nature of the billboard activity mimics how UK skiers typically book their holidays – online and at the last minute.”

David Atkinson, Managing Partner at Space, observed: “SWISS is the skiers’ airline, with more than 180 flights a day from London and free ski carriage as part of its inclusive fares. The #SnowNow campaign is the perfect conversation starter for SWISS, disrupting the humdrum of the London commute, letting us boost brand awareness and drive traffic online, as well as offering the chance to win a premium taste of the Alps with SWISS.”