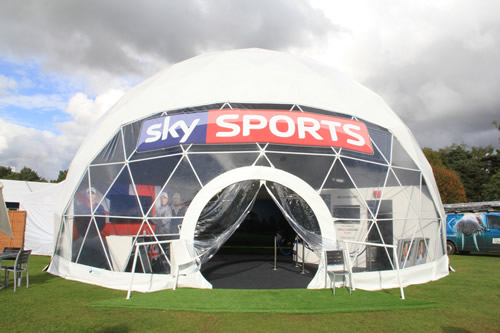 RPM ensure Sky Sports are on ‘par’ with The British Masters 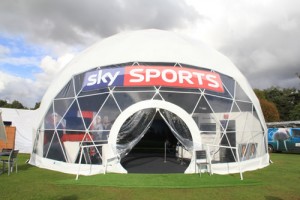 Sky Sports, headline sponsor for The British Master’s, has been running experiential marketing at the event, which ran from October 7th – 11th at Woburn Golf Course and which saw an estimated 60,000 visitors over the four days.

This year is the first time The British Masters returned to The European Tour International Schedule in seven years. Working with The European Tour and its leading players, Sky Sports want to engage, excite and inspire new and existing golf fans through its on-air coverage, promotion and event staging and activation.

To support Sky in this mission, experiential agency RPM created an experience that allowed spectators to try their hand at putting on the panoramic 18th green at Woburn, by recreating a replica green inside a giant 14m diameter dome, creating real stand out within the sponsors’ village.

By taking part in the challenge of putting a hole in one, fans are entered a draw to win a trip to the Ryder Cup 2016, in the US.

The dome and replica green were also the setting for daily golf master classes hosted by Sky Academy,  with golfing stars including three time European Tour winner Nick Dougherty  trying to explain the rudiments of the game.  The master classes were broadcast live on Sky Sports.

The dome also featured the Sky Sports News HQ experience, giving fans the opportunity to try their hand at presenting a news report which they could then download and share across their social media channels.

All of this activity follows on from the ‘Sky Sports Thursday’ initiative that saw 15,000 tickets given away for the first day of the British Masters to generate buzz and footfall for the event.

Amanda Marsden, Promotions Manager at Sky Sports, says: “The British Masters is a great opportunity for Sky Sports to showcase our superiority in Golf, and provides a great platform for us to engage our golfing audience. RPM have helped us produce a fantastic experience for fans to enjoy throughout the tournament.”