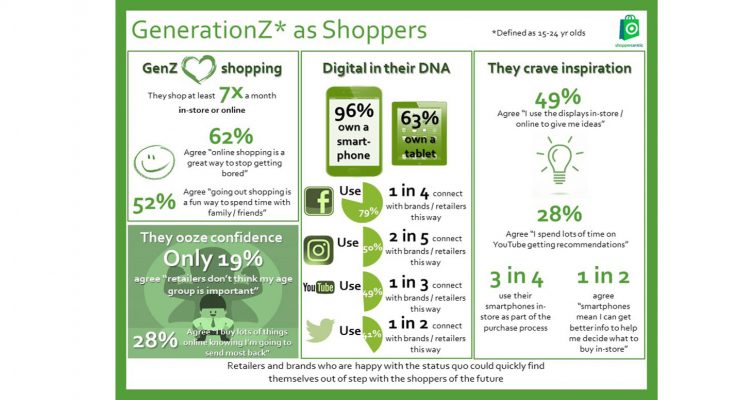 Generation Z shoppers (those aged from 15 to 24) are shop-happy and digitally-savvy consumers who are open to being influenced by retailers – but they also have high expectations of them.

Danielle Pinnington, Managing Director at research company Shoppercentric, which has published the new report, says: “Generation Z are a fascinating section of the shopper population. They’ve grown up in a truly connected world and are starting to access the kind of money that means they can flex their spending power. A lot has already been written about who they are as consumers, but there’s been no particular focus for those interested in shoppers. We wanted to take a closer look at what their expectations and needs are since they may not be today’s big spenders, but they could give a real pointer to where the future of retail lies… if we take the time to listen to them.”

Other findings of the report include:

Social Media plays a huge role for Generation Z, and they are more likely than older shoppers to be connecting beyond their social groups of family and friends or even like-minded groups, to retailers or brands. Specifically:

Pinnington observes: “We’re all aware that Generation Z are easily bored and have a very short attention span, but on the flipside, they have great confidence and a terrific support system provided by social media which helps them to manage risk when they’re choosing what to do and what to buy. Plus they’re aware that retailers are interested in them and that they’re worth getting to know – this is in stark contrast to how many older shoppers feel.”

She concludes: “Generation Z know that they’re being courted, so it stands to reason that they expect to be impressed before they part with their cash. This apparent self-assurance is important because it will set a high bar against which retailers and brands will be judged moving forwards. Each touchpoint with these shoppers needs to be a positive experience and reflective of the brands’ tone of voice and values whilst remembering that this is a generation that enjoys shopping, so retailers will need to deliver to that brief and make it fun both instore and online.”