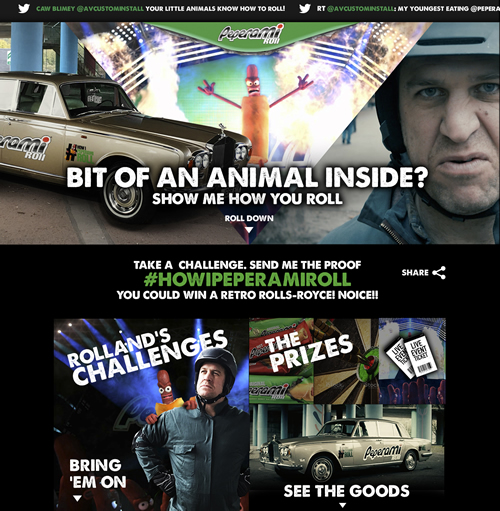 Peperami is giving fans a chance to win a Rolls-Royce by showing the world how they roll – literally.

As part of a Facebook and Twitter social media campaign to launch the new Peperami Roll, Peperami fans are being challenged to upload video or photos of themselves rolling in various situations, in response to a range of different challenges.

One entrant, drawn at random, will win a Peperami-branded 1972 Silver Shadow Rolls-Royce.

The three-week campaign was devised by Havas helia and kicked of this Monday (November 16th 2015) with the release of a launch film featuring the Silver Shadow Rolls-Royce, which went out as a Sponsored Ad on Facebook as well as under the Promoted Twitter Trend.

Havas helia is also putting out four challenge videos featuring the ‘pro-Roller’ character, Rolland. He encourages fans to roll in a different location each time and post their video or photo to PeperamiTV, Facebook or Tweet with #HowIPeperamiRoll for a chance to win.

Pro-Viners, chosen for their large social following and appeal to our 18-34 year male target audience, will support each challenge video. Each pro-Viner will submit their own rolling video on their Vine, Facebook and Twitter with #HowIPeperamiRoll and call for others to get involved.

Peperami’s sponsored and organic social output will drive people to the campaign page, where people can watch Roland’s challenge videos, see the prizes, find out how to enter and view all the social activity aggregated in a visual feed.

Entrants to each of the four challenges have a chance to win various prizes, including darts tickets, a year’s supply of Peperami Rolls and ‘Let It Roll’ Prague festival tickets, flights and accommodation. There will also be random prize giveaways.

One person, randomly chosen from all the entries, will be crowned the ‘Ultimate Roller’ and will win the Rolls-Royce.

Pavan Chandra, Senior Brand Manager at Peperami owner, Jack Link’s, says: “We challenged Havas Helia to do something different to support the launch of the Peperami roll.  We wanted a punchy campaign that delivered great value and disruption and this campaign certainly delivers that.  When they suggested giving away a Rolls Royce I was scared, and that’s a good thing – boring creative doesn’t scare you!  It’s a great campaign and we look forward to seeing the results.”

Peperami Roll is a Peperami salami stick in a bread casing. The brand is now owned by US savoury snacks company Jack Link’s, which bought it from Unilever in 2014.