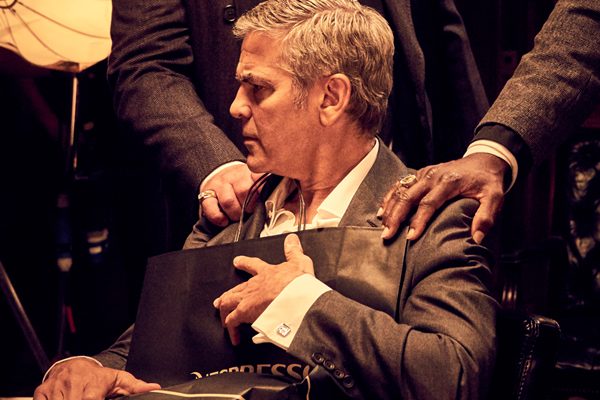 Nespresso, the pod coffee machine system from Nestle, has launched its latest campaign featuring Hollywood star, George Clooney, with a fully integrated campaign featuring TV and online advertising, plus a content-rich landing page including behind the scenes footage and consumer engagement through interactive image filters and gamification and prize promotions on the brand’s social channels.

Launched September 25th 2016 at www.nespresso.com/whatelse, the light-hearted campaign sees George embark on a rough night as he looks to protect his precious coffee. Starting in the stylish Nespresso boutique on London’s Regent Street, George’s adventure begins as he strikes up conversation with an attractive female over a cup of Nespresso coffee. Sadly for him, she is the wife of the ‘boss’, who demands Clooney’s Nespresso as punishment.

And so ensues an eventful evening, courtesy of the ‘boss’, played by ‘Pirates of the Caribbean’ and ‘Deadwood’ star, Ian McShane, which sees Clooney take a trip through the backstreets of London. The following morning we see a battered and bruised George in his home savouring his Nespresso coffee, as he lets the audience and his maid know that he ‘wouldn’t change a thing’ about his Nespresso experience. As the maid walks off, she comments: “Must be some coffee…”

The campaign was created with McCann Worldgroup and kicked off with a teaser phase earlier in September with consumers were invited to guess what fate awaited George Clooney.

Alfonso Gonzalez, Chief Customer Officer for Nespresso, explains: “Our relationship with George strengthens year on year, and in our twelfth collaboration, we have created a storyline that shows Clooney at his best. He is a true partner for the brand, and here we see just how far he is willing to go for that incomparable Nespresso coffee experience”.

The full TV advertising campaign from Nespresso, entitled Change Nothing debuted worldwide (excluding US and Canada) from September 25th. It can be viewed on YouTube or via the Nespresso website, www.nespresso.com/whatelse.