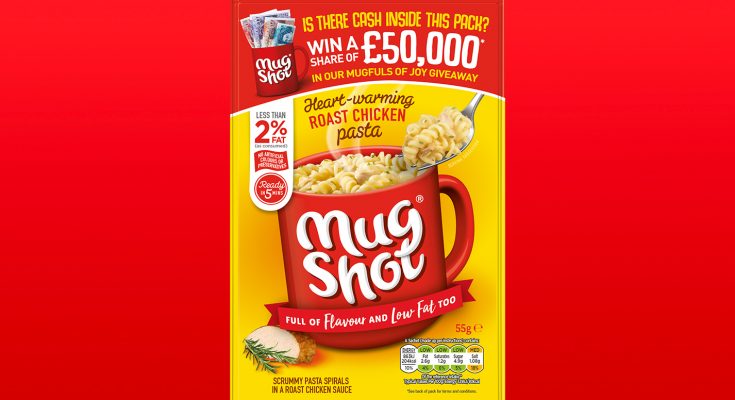 This New Year sees Manchester agency Blue Chip and Symington’s spreading a little bit of joy across the nation by giving away a share of £50,000 cash inside promotional packs of Mug Shot.

This is the first campaign that Blue Chip has delivered for Symington’s since the appointment in 2018 and the brand’s biggest promotional activation to date, being supported by TV, radio, digital, and social media advertising.

The promotion is designed to banish the January Blues, officially the most depressing month of the year, with real £5, £10, £20 and £50 notes to be found inside promotional packs of Mug Shot.

Dawn Cain, Senior Account Director at Blue Chip states “Mug Shot’s ‘Mugfuls of Joy’ campaign aims to provide a little bit of cheer at a time when both bank balances and moods are generally low. Combine this with the low fat nature of the Mug Shot product as we look to shake off the excesses of Christmas and we believe we have the formula for a successful campaign.”

This is the first campaign of its kind for the Mug Shot brand and Mike Benton, Head of Snacking Business Unit at brand owner’s Symington’s, said: “The campaign has a really strong value offer for the consumer with the instant cash prizes, and we are confident it will resonate well with our core target audience. We have gone even bigger in terms of investment this time around, and with the TV- led fully integrated support plan we have put behind ‘Mugfuls of Joy’ we are confident the returns will reflect this.”

Promotional packs will be hitting shelves in all major retailers from January until the end of February.