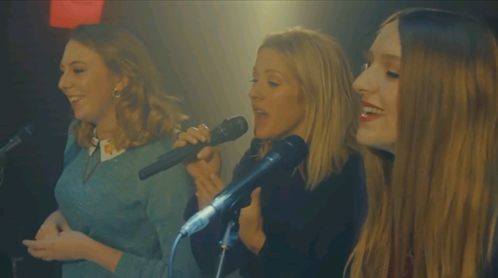 BRIT Award winning singer-songwriter, Ellie Goulding, gave two of her biggest fans the surprise of a lifetime when she joined them on stage for a live, impromptu duet of her latest single, Army.

MasterCard holders who visit www.pricelesssurprises.co.uk/ can register for the chance to win a ‘meet and greet’ with Ellie Goulding herself.

In the Ellie Goulding surprise, 20-year-old King’s College students Martha and Lucy thought they were recording their cover of Goulding’s new track Army for a documentary about music superfans.

During the recording, a curtain lifted on their recording booth to reveal they were actually on stage performing in front of a live audience. Ellie Goulding herself then stepped out on stage to perform the track alongside them. A full-length version of the performance is on YouTube. https://www.youtube.com/watch?v=vGAlZOfgE60

Shaun Springer, Head of Brand and Sponsorship, MasterCard UK & Ireland, said: “Ellie is one of the biggest and most talented artists in the UK right now, and we’re proud to be working with her. Her new track epitomizes everything that our Priceless Surprises campaign is about, sharing your love of music with the people around you. Music fans should keep their eyes peeled for more surprises to come this year.”

The Priceless Surprises campaign was created for MasterCard by advertising agency McCann London.