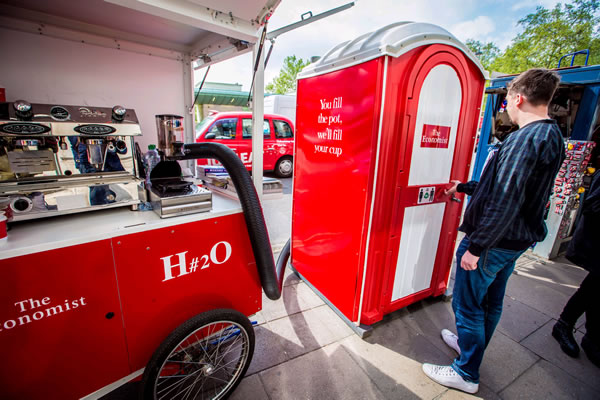 The Economist has launched the latest in its multi-award-winning Discomfort Food campaign, where potential subscribers are offered a free sample of food or drink which many might find repellent.

Following on from its ‘cat poo coffee’ and insect crepes activities, the business magazine is asking consumers if they would drink coffee made with water derived from their own, or other people’s, urine.

Entitled H#2O, the real-world activation consists of a specially designed branded manned coffee trike offering free beverages to passers by. On closer inspection, consumers claiming their free drink notice the adjacent portaloo, which appears to be supplying water for the coffees.

Carefully selected and trained brand representatives then inform the interested parties that trials are taking place in selected countries to overcome clean water scarcity through purifying urine. The question is: will they still drink the free coffee?

“Once their reaction has been gauged, consumers are told that in this instance, urine is not being used as a water source for the coffee, the activation is simply highlighting a solution,” explains Daniel Hennessey, account manager at real world marketing agency Sense, which is running the campaign for The Economist. “The aim is to flush out – excuse the pun – potential Economist readers through their interest in the campaign subject and offer them discounted subscriptions, essentially filtering out the hottest prospects.”

The creative idea behind the campaign is that The Economist is a challenging read best appreciated by intelligent people with an enquiring nature who are prepared to think outside the box and push boundaries. The various Discomfort Food activities are designed to ‘self-select’ consumers who are most likely to stay as Economist subscribers and weed out those who are simply taking advantage of a discount offer.

In its various forms over the past 12 months, the Discomfort Food campaign has generated in excess of 14,500 subscribers.

Commenting on the latest campaign, Marina Hadyn, Senior Vice President, Circulation and Retail Marketing at The Economist, says: “We’re delivering an illustrative real world experience on the technology sitting behind water purification for water-scarce locations, based on Economist content. By bringing our content to life, we are able to raise brand awareness and readership, while delivering an Economist experience that highlights some unexpected features of our brand and product – with the ability to surprise.”

The H#2O has been appearing at London’s Hyde Park and Canary Wharf and will be touring the UK capital’s business hubs over the summer.