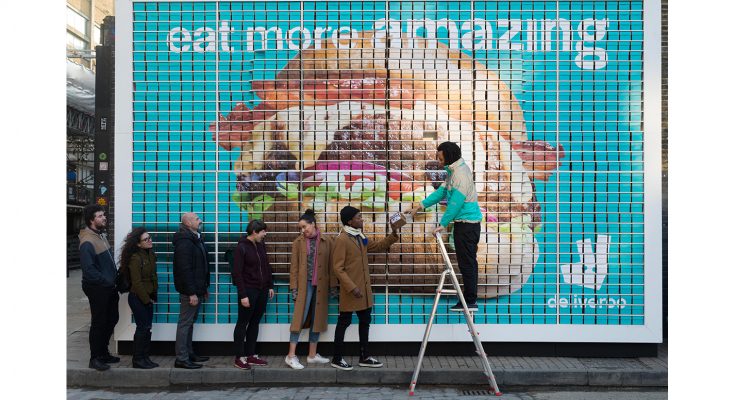 Deliveroo gives away thousands of burgers from billboard installation

Mar 15, 2018, 13:15 pmComments Off on Deliveroo gives away thousands of burgers from billboard installation

On-demand delivery service Deliveroo celebrated the fact that it has now delivered 10 million burgers in the UK since launch in 2013 with what it claims was the world’s first billboard made entirely out of burgers, all of which were free for passers-by to eat.

The four metre high, six metre wide structure was erected as part of the brand’s Eat More Amazing campaign, and follows Deliveroo’s announcement in December that burgers are the UK’s favourite takeaway meal. The double decker bus-sized billboard was constructed using thousands of burgers from some of Deliveroo’s most popular burger restaurant partners, including GBK, Byron, Bleecker Burger, Polo, and Beer + Burger. Vegetarian and chicken options were also available.

The activation was created and managed by PR agency Hope&Glory, working alongside creative production agency We Make Stuff Happen.

The burger billboard was open to the public from 12.00pm to 7.00pm (or while stocks lasted) on March 13th at Ely’s Yard Street Food UK Ltd in The Old Truman Brewery on Brick Lane in East London.

Emily Kraftman, Deliveroo’s Head of Marketing for UK and Ireland, says, “We know that the UK loves burgers as it’s one of the most popular dishes ordered on Deliveroo. That’s why we decided to celebrate this upcoming milestone delivery and remind people that every meal is a chance to eat more amazing.”

Deliveroo is an award-winning delivery service founded in 2013 by William Shu and Greg Orlowski. Deliveroo works with over 35,000 restaurants and over 30,000 delivery riders to provide food delivery services in over 200 cities across 12 countries, including Australia, Belgium, France, Germany, Hong Kong, Italy, Ireland, Netherlands, Singapore, Spain, United Arab Emirates and the United Kingdom.