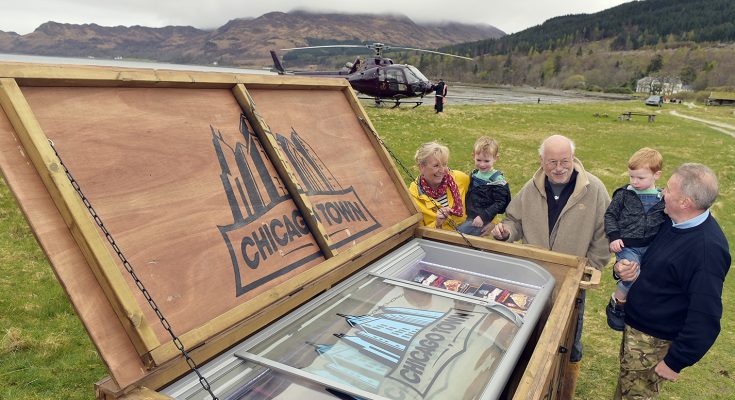 The UK’s No. 1 frozen pizza brand, Chicago Town, has just given residents of the UK’s most remote community, the Scottish village of Inverie on the Knoydart Peninsula, “the ultimate takeaway taste” in a stunt which saw a crate containing a fully-stocked freezer cabinet packed full of Chicago Town’s ‘The Takeaway’ pizza flown in by helicopter and landed in a local field.

Chicago Town admits that the epic ‘takeaway’ delivery might seem a over-the-top but Inverie is so remote it is only accessible by helicopter or ferry, so helicopter was the only real way to ensure the villagers got their first taste of ‘takeaway’ pizza.

Inverie in Western Scotland is described by experts as “Britain’s Last Wilderness”. It has just 120 residents and is officially home to the UK’s most remote public house, The Old Forge. The whole community is so small that it shares a single postcode, PH41 4PL. The UK road network doesn’t extend to the peninsula. It is only reachable by a 17-mile hike over very rough terrain or by a regular ferry from Mallaig, seven miles away, giving the place a Guinness National Record for remoteness.

The community has just two shops and a post office to keep the Old Forge pub company. The nearest police station and doctor’s surgery are in Mallaig and the nearest hospital is in Fort William, 26 miles away. The Mallaig lifeboat acts as the community’s emergency response unit. The community is completely separated from the National Grid and acquires all its electricity from renewable energies – the primary source of power for the village is a unique hydro-electric system.

To reach the nearest takeaway would take a minimum of two hours, travelling by boat and car.

So Chicago Town decided to step in and prove there is a need for a high street takeout in the village because Chicago Town’s Takeaway “delivers the ultimate takeaway taste, straight from the freezer.”

The brand chartered a special helicopter to fly in the crate of its best-selling The Takeaway pizza range from a base in Inverness. The helicopter hovered above a field outside the village before lowering down the crate full of pizza. A Chicago Town brand ambassador squad then exited the helicopter to make sure the pizzas were in perfect condition before handing them out to the residents.

Inverie resident Ian Robertson, aged 70, said: “We’ve heard all about takeaway food being delivered elsewhere in the UK. We’ve never actually been able to enjoy one ourselves because we’re so remote no-one would ever deliver here. So to see Chicago Town make such a fuss of us today – and to get our first takeaway delivery by special helicopter – makes the wait well worthwhile. It’s definitely not something we’ll forget in a hurry. And the pizza was lovely.”

A Chicago Town spokesperson said: “We were determined that after years of doing without, we’d go the extra mile to make sure this community was able to enjoy a real takeaway experience with our ‘The Takeaway’ pizza. They all agreed the taste was so good straight out of the freezer that there was actually no need for a takeout in the village after all. It was a bold operation that took months of planning but everyone involved was determined to make it happen.”

Chicago Town has committed to ensuring that Inverie gets regular deliveries of Chicago Town The Takeaway from now on.

The Knoydart peninsula is owned by the Knoydart Foundation, set up in 1997 to buy the old Knoydart Estate and subsequently manage the land on behalf of the community and its thousands of visitors. The community controls 17,500 acres, residential properties, a hydro-electric scheme and many old buildings. All these assets were in very poor condition and it has taken many years of hard work to bring them back into working condition. 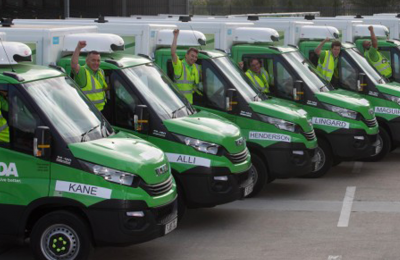 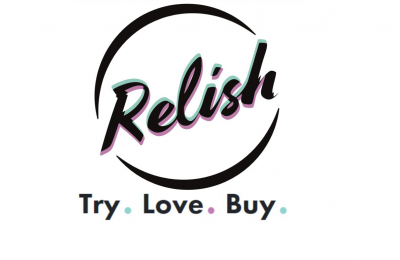