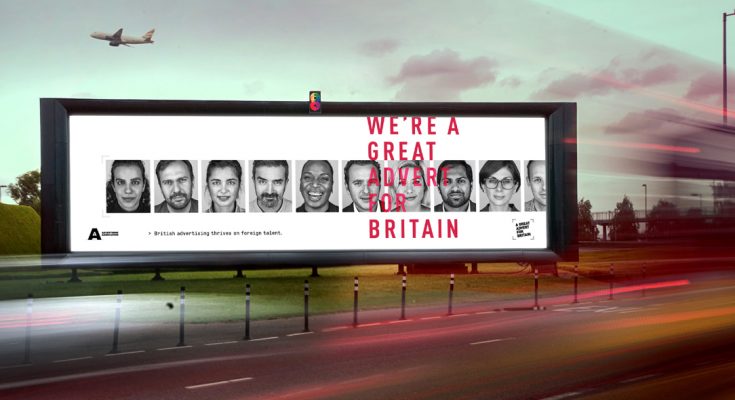 The Advertising Association is today launching a new report, Advertising Pays: World Class Talent, World Class Advertising, and a campaign aimed at protecting the advertising and marketing industry post-Brexit by championing access to global talent and to celebrate the immense contribution of international talent to the UK.

The new report, in partnership with LinkedIn, reveals that a diverse international workforce is central to the UK’s position as a global advertising and marketing hub.

Analysis from a pool of 328,000 LinkedIn members who work in advertising and marketing in the UK gives detailed insights into how international talent plays a pivotal role in the UK’s creative success. It also demonstrates that the UK is a key source of talent for other advertising hubs worldwide.

With widespread uncertainty around talent moving to and from the UK post-Brexit, the Advertising Association is warning that the UK’s creative crown is in jeopardy.

The proportion of the current advertising and marketing workforce in London that has migrated here from abroad in the last 12 months is three times higher than the corresponding figure in New York; it is also higher than in Paris and Amsterdam. More than a third of this talent comes from within the EU, with many others arriving from the United States and Australia.

Unsurprisingly, London is a hub for advertising and marketing talent – in fact 6% of LinkedIn members in the London area work in the industry. However, despite London’s global reputation for advertising, more than half (57%) of the industry’s UK workforce is based outside of the capital. Manchester is the largest of the city hubs.

James Murphy, CEO of adam&eveDDB and Chairman of the Advertising Association says: “The UK ad industry is a world-leader because we’re open to the world. It will be catastrophic to the long-term success of the sector if we can’t access the right talent quickly and easily. Global brands want to work with the best talent and the UK has it. As an industry that delivers £120 billion of GDP per year for the country, anything that knocks advertising will dent the economy.”

Josh Graff, UK Country Manager at LinkedIn, adds: “I have experienced first-hand what makes the UK such a creative powerhouse – the people. We’re a wonderfully diverse and international workforce that enables brands and their agencies to create campaigns which resonate across international, cultural and socio-economic boundaries. I hope that this report, informed by LinkedIn‟s powerful data, can not only help employers make better decisions about their talent pipelines but that it will also inform policy makers and educators on what’s required to ensure the sector continues to thrive.”

The ads will appear on posters, online display advertising and in the press, in media space donated by media owners in support of the campaign.

Stephen Woodford, CEO of the Advertising Association says: “Our new report, informed by LinkedIn’s powerful dataset, highlights immigration as the most important area for Government support to maintain the UK’s position as the world’s leading global advertising hub and drive growth domestically. Our new campaign, ‘A Great Advert for Britain’, brings this important issue to life. We have been working closely with the relevant Government departments on measures to safeguard and promote UK advertising internationally, as well as stimulate further growth in the regions among SMEs. We will continue to make the case to Government for funding and support in these areas.”

Alongside its campaign, the Advertising Association has met with the Migration Advisory Committee, an influential non-departmental advisory body, to share the report findings to help inform plans for access to talent post-Brexit.