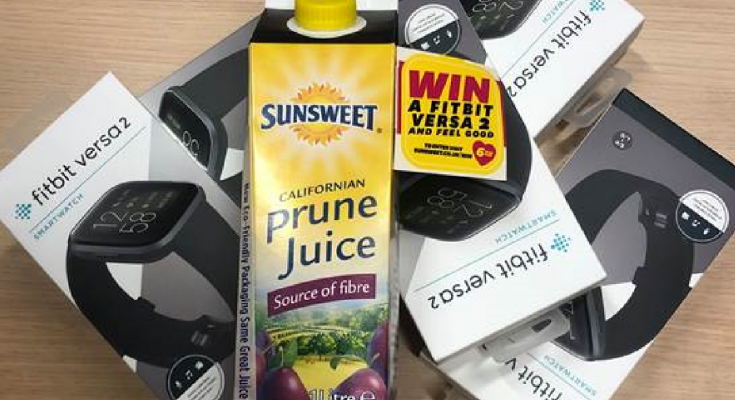 Blue Chip were tasked with creating a cost-effective and simple campaign that married together the goodness of Sunsweet prune juice, and the ever-growing trend for health and wellbeing.

The promotion is compelling, easily communicated in-store, disruptive at shelf and would ultimately drive rate of sale.

By recognising that 60% of Sunsweet’s audience are health-conscious Gen X’ers who feel that they need to be more pro-active about their health, along with shopper insights around attitudes post-Christmas, we landed on the newest Fitbit as the perfect prize.

With all of these aspects front of mind, the Blue Chip team crafted the ‘Feel Good with Sunsweet’ campaign, from concept to implementation – a campaign which gives shoppers the chance to win a FitBit Versa 2 by entering their details and barcode into a prize draw online.

Dawn Cain, Senior Account Director at Blue Chip said: “Whilst a relatively straightforward brief, we faced a number of restrictions when it came to printing and design constraints, prize fund allowance and ambitious campaign turnaround timings! Thanks to our innovative on pack stickers acting as their own POS at shelf, a bold design and a highly relevant prize, we were able to create genuine standout in aisle and bring a unique level of disruption not normally seen at the ambient fruit juice fixture.”

The promotion is running until 29th June 2020, and can be found in all major retailers now. For full T&C’s, and the chance to win, see here: www.sunsweet.co.uk/win