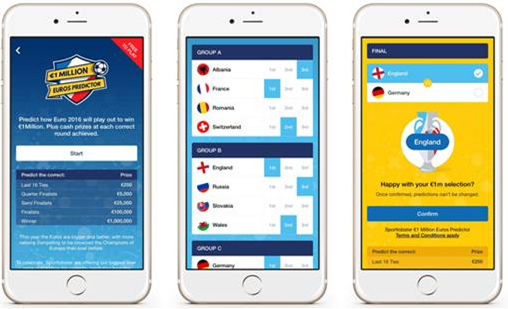 Sports social app Sportlobster is giving fans the chance to win €1m this summer with its €1 million Euros Predictor competition, which challenges consumers to predict the exact outcome of Euro 2016.

Competitors will need to predict the 16 teams that will progress from the group stage, including their position, and then the teams progressing from each knock-out game from the second round through to the outcome of the final to win €1,000,000 – one of the UK’s biggest ever prizes for a free-to-enter competition.

Sportlobster is also offering cash prizes for fans who reach each stage with a full set of correct bracket predictions, from €250 for an accurate last 16, to €100,000 for the correct final match-up. The big-money competition is available exclusively on the Sportlobster app, free to download via the App Store and Google Play.

To support the launch of the €1 million Euros Predictor, Sportlobster is partnering with Trinity Mirror to drive awareness and participation through a series of innovative digital advertising solutions, native articles across print and online, together with social media activity. Sportlobster will also be working with former England football stars Michael Owen, Sol Campbell and Danny Mills who will be offering consumers insights on the tournament and how to complete their Predictor.

Andy Meikle, co-founder and CEO of Sportlobster, said: “The Sportlobster €1 million Euros Predictor will offer the biggest prize on the market – a truly life-changing sum of money. To put it into perspective, at the start of the season, fans who bet £10 on Leicester winning the Premier League would have won £50,000. With Sportlobster, fans have the chance to win one million Euros without paying a single penny. Our users will also be able to compete in match-by-match Prediction Leagues keeping friendly rivalry alive to the final kick of the tournament.”

In advance of the Euros, the Sportlobster app is also set to receive a comprehensive upgrade as the company introduces updated navigation that will offer an even smoother user experience. The home page will now provide a snapshot of everything that is happening in a user’s chosen Fanzones, combining the most popular and latest news, blogs, lobs (updates from fellow users who share the same favourite teams and athletes) and scores.

A newly developed algorithm will serve fans the most popular and engaging content on the home page and on individual Fanzones, moving on from the chronological presentation used previously.

It will also be easier for users to see all the fixtures, live scores and results according to their preferences across multiple sports. There will be an additional focus on social event chat during live sporting events which will bring the conversation together, while interaction with other fans and discovering the most popular content is simpler than ever.