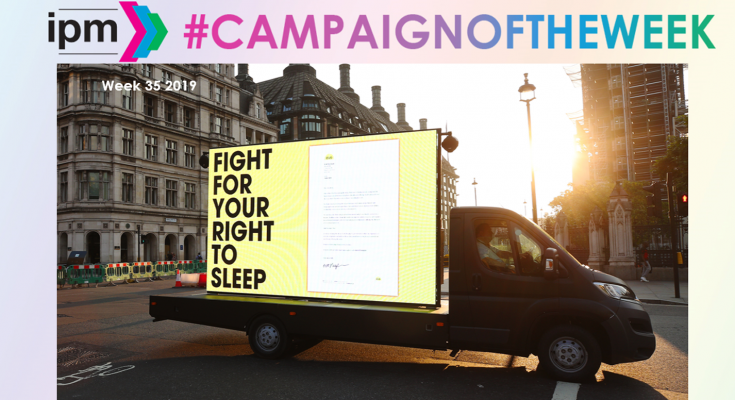 Aug 27, 2019Campaign of the Week, News, OtherComments Off on Sleep wellness brand urges the government to amend the law to allow the UK the right to sleep

eve sleep has today published an open letter to Lord Chancellor and Secretary of State for Justice, The Rt Hon Robert Buckland QC MP, calling on him to support the campaign to recognise sleep as a human right.

Despite the fact that sleep is as important to a healthy lifestyle as exercise and nutrition, and a fundamental driver of both mental and physical wellbeing, it is not currently included within the legislated list of fundamental human rights.

The letter, which was delivered to parliament and published on a mobile billboard outside the Palace of Westminster, marks the beginning of eve’s mission to have sleep protected by law in the Human Rights Act 1998 .

The company have identified that societal health and wellbeing depends on sleep, and a change in the law could protect the rights of vulnerable groups such as the people living under the Heathrow flight path, shift workers, A&E doctors, and teachers.

As part of the social mission to change the policy, eve sleep is assembling a team of independent experts to act as a think tank around the proposed legislation and will produce a white paper detailing the impact it will have on the country should the law change.

James Sturrock, CEO of eve sleep, said: “At eve we’re on a mission to help the nation realise and enjoy the power of sleep wellness and this campaign is another part of our mission to improve sleep for all. But to make a watertight case to the government, we are calling on the support of experts, businesses, community groups and charitable organisations across the country, to join us on our quest to help sleep become a fundamental human right.”

As of February 2016, sleep is only protected by law in India. The India’s Supreme Court reasoned that sleep comes under the right to life because sleep is essential for human beings to “maintain the delicate balance of health necessary for its very existence and survival”.  It is rumoured the UK Government is set to review evidence on sleep and health and release official guidance on the minimum number of hours of sleep people should achieve each night. However, there has been no commitment so far to amending the Human Rights Act 1998 to specifically include the right to sleep.

To read the full letter, share your sleep story or get involved visit: www.evesleep.co.uk/righttosleep