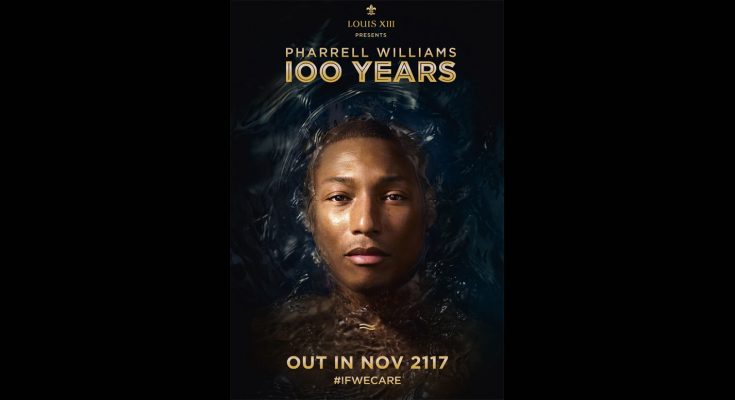 LOUIS XIII Cognac has commissioned an exclusive musical composition from Pharrell Williams which will only be heard in 100 years – and only then if the world’s population has taken the necessary steps to combat global climate change.

The composition, ‘100 Years – The Song We’ll Only Hear If We Care’ was played once only in Shanghai on November 13th 2017 to a select audience who were forbidden to record it in any way. Pharrell’s exclusive track was then recorded onto a record made of clay from the chalky soil of the Cognac region, and stored in the cellars of LOUIS XIII in a state-of-the-art safe specially designed by Fichet-Bauche which will be destroyed when submerged in water.

Following the event in Shanghai, LOUIS XIII Cognac will launch an international tour in major cities all around the world, in order to raise awareness and funds for environmental organizations through charity dinners. Through these events, LOUIS XIII will directly support associations dedicated to curbing climate change on a local level.

If sea levels continue to rise due to climate change, then chances are the cellars will be filled with water in 100 years, LOUIS XIII says, so destroying the recording. The only way to guarantee this original piece of music will be heard again in 2117, one century from now, is by addressing the consequences of global warming. ‘100 Years’ by Pharrell Williams will be out in 2117, but only #Ifwecare.

“I love the fact that LOUIS XIII thinks a century ahead,” said Pharrell Williams. “We should all do the same for the planet. We have a common interest in preserving nature for the future. Each bottle is the life achievement of generations of men and women. It’s all about legacy and transmission.”

“We are incredibly proud of this innovative project,” said Ludovic du Plessis, Global Executive Director of LOUIS XIII. “Nature and time are at the heart of what we do.  If the environment is unstable, even the greatest cellar master would not be able to compose the exceptional blend that is LOUIS XIII.  Global Warming is one of the most important issues of the 21st century; with ‘100 Years – The Song We’ll Only Hear If We Care’, we hope to inspire people around the world to take action.”

In 2015, LOUIS XIII partnered with renowned actor and creative visionary John Malkovich and famous Hispanic American film-maker Robert Rodriguez to create ‘100 Years: The Movie You Will Never See,’ a thought-provoking artistic work exploring the relationship of past, present, and future which will be kept locked up until 2115. The Rémy Martin-owned spirits brand sent 1,000 exclusive invitations to people from around the world to attend the premiere of ‘100 Years’, on November 18, 2115, at the House of LOUIS XIII in Cognac, France. Recipients are being asked to pass these invites on to their descendants.

The Remy Cointreau Group has long been committed to the international effort to curb global warming. It works with the United Nations ‘Global Compact Advanced’ program on issues including sustainable wine-growing practices, energy efficiency, eco-friendly packaging, optimization of product shipments and forest conservation.

“As a company, we must do the best we can every day to make the world a better place,” explained Ludovic du Plessis. “But no single person or brand can stop global warming on their own – it must come from the unified global actions of all people around the world. Together we are much stronger than any person or brand is on their own. This is not about any one city or country but the future of our planet as a whole. Our concern is not primarily for Cognac, but for every city around the world.”