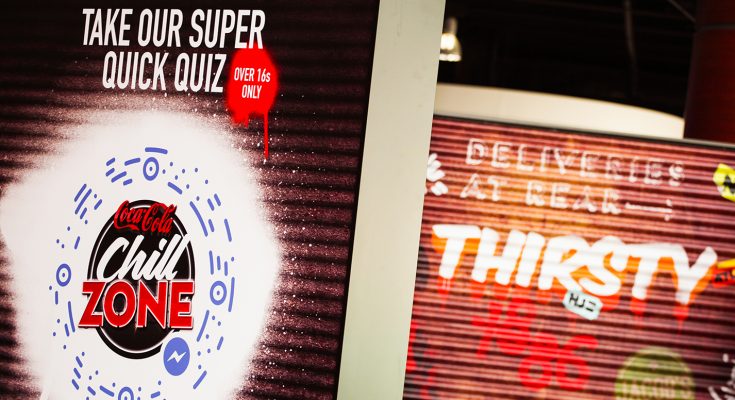 In partnership with Coca-Cola European Partners and Vue Entertainment, integrated agency LIFE has launched the ‘Coca-Cola Chill Zone,’ a fully immersive experience for teen cinema goers. The experience is designed using assets from the new Disney’s Marvel Studios film, Ant-Man and the Wasp and will run in Westfield White City’s Vue Cinema until the end of the summer.

The interactive pre-film hang-out features a wall-mounted screen playing the Ant-Man and the Wasp trailer and featurettes. Additionally, a branded movie-wall complete with giant salt shaker and tiny skyscraper lets guests share pictures of themselves ‘in’  the movie and an Ant-Man quiz can be accessed by scanning a Facebook Messenger code, providing further fun on the stand.

Teens are also encouraged to ‘swap the small screen for the big screen’ and put their phones down for the duration of the movie. A promotion with digital detox app HOLD allows guests to claim a free Coca-Cola Zero Sugar with their next film if they recharge their phones in one of the 24 mobile charging chambers during the movie.

Omar Sadiq-Baig, Marketing Manager at Coca-Cola European Partners commented: “LIFE have been a fantastic partner to work with in delivering this project. They’ve been able to turn my creative thinking into a really clear vision of what would engage a teen audience and how to make the Marvel Studios assets come to life within the Vue Cinema foyer space. The team have showed a real enthusiasm from the start and we’re looking forward to working together on further campaigns in the future.”

Chris Walker, Managing Partner at LIFE added: “It has been really exciting to launch this experience in partnership with Coca-Cola European Partners, Disney and Vue Cinemas. Given that the cinema trip is often the first opportunity for teens to go and hang out independently with their friends, the ‘Coca-Cola Chill Zone’ is the perfect space for making these moments even more of a fun and shareable experience.”