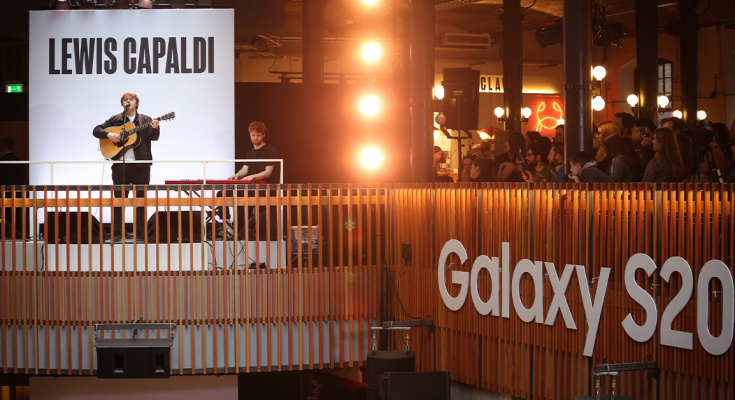 Over the weekend, Lewis Capaldi brought a busy London market hall to a standstill as he played an unannounced lunchtime concert.

The free performance was staged and filmed by Samsung to mark the launch of its new flagship Samsung Galaxy S20 phone range. The story of the concert will be told in a special three-part TV ad which is to be broadcast during the breaks in ITV’s coverage of the Brit Awards on Tuesday 18th February.

Accompanied by his keyboard player, the unassuming superstar treated the crowd to hits such as Bruises and recent number one single Before You Go as he began his show at 1pm.

Capaldi’s unique 30-minute set peaked with a euphoric finale featuring a mass singalong of huge hit Someone You Loved with more than 500 onlookers singing the chorus back to him.

The impromptu show was officially announced just a matter of minutes before Lewis began his unforgettable performance. By the close of the concert, the market was at capacity with 500 lucky people in attendance as word spread about what was unfolding.

In a world-first, Capaldi’s performance was captured on a Samsung Galaxy S20 Ultra and live-streamed to the world-famous screen at nearby Piccadilly Circus in a 30-minute takeover. Passers-by who gathered at the tourist hub was able to watch in IMAX quality of the new Galaxy S20 Ultra. The show was also beamed to other London screens, including two at Westfield White City, Samsung KX and the Samsung Experience Store.

Lewis Capaldi said: “I was very excited to be invited by Samsung to shout at some passers-by during their lunch break, I’m sure no one expected to be feasting their eyes on such a handsome snack (me).”

Sharon Hegarty, Marketing Director from Samsung UK, said: “Lewis is a performer like no other – just like the new Galaxy S20; so it was fitting to be able to bring them together. We’re pleased to be able to finally introduce the new Galaxy S20 range to the public, and it’s great to partner with Lewis to celebrate this moment with an unforgettable and unrepeatable gig. Lewis has a unique presence both on his social channels and on stage. We are so excited to capture him in perfect detail on the Galaxy S20, which delivers a camera like no other”.

The new Galaxy S20 range, available in Galaxy 20, S20+5G and S20 Ultra 5G,  is now available to pre-order. The product will be widely available in Samsung stores from the 13th March.