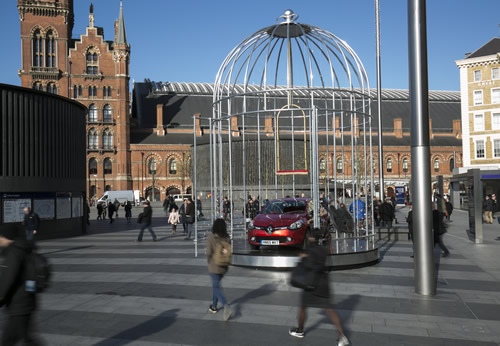 Renault celebrated the 25th birthday of its Renault Clio last week with an experiential activation at London’s Kings Cross St Pancras station, departure point for the Eurostar service to Paris, featuring one of the cars in a gilded birdcage

Standing at 25ft high, the Moulin Rouge-style bird cage was covered with Parisian-style ‘love locks’ – padlocks with romantic messages written on. Visitors were able to unlock them to uncover incredible prizes to release their Va Va Voom (in homage to the brand’s advertising campaign), including Paris getaways, Michelin star meals and French beauty treatments.

The installation was in place for three days at the end of April.

In celebration of the Clio’s anniversary, passers-by will be given the opportunity to unlock their Va Va Voom with 25 of the locks revealing amazing prizes including a star prize of a Va Va Voom trip for two to Paris, the brand’s home city, including three nights at a top boutique hotel plus first-class French cuisine and cocktails at the city’s trendiest restaurants and bars. Other prizes included a day of beauty treatments at a leading French spa in the UK plus a style revamp from a top French clothing brand, a meal for two at Galvin at Windows, macarons from luxury Parisian tearoom Ladurée and L’Occitane beauty product vouchers.

People were also encouraged to add their own Parisian inspired locks to the sea of padlocks. The public was encouraged to take snaps of the installation and share it across their social channels with the official hashtag, #Clio25.